This year is certain to be a holiday like no other, leaving retailers tasked to predict what strategies will win over shoppers in an unpredictable season.

However, there are a few safe bets. Location and real-time data will be key for retailers this season as regulations will vary for retailers from area to area. Safety will be top of mind, so stores will need to be on top of their game to draw shoppers inside, where allowed. E-commerce, curbside and mobile usage are likely to explode as many shoppers avoid stores out of safety concerns or are just too busy to visit shops.

Retailers should be preparing now to react to changing shopping behaviors. To help craft your holiday retail strategy, RIStakes a look at predictions and forecasts from the experts, along with recent retail surveys.

“Lower projected holiday growth this season is not surprising given the state of the economy,” says Daniel Bachman, Deloitte’s U.S. economic forecaster. “While high unemployment and economic anxiety will weigh on overall retail sales this holiday season, reduced spending on pandemic-sensitive services such as restaurants and travel may help bolster retail holiday sales somewhat. E-commerce is likely to be a big winner because consumers have shown a clear movement towards buying online rather than at brick and mortar stores.”

“Black Friday lines won’t disappear, but we expect lines of consumers waiting for store openings will be replaced by long queues of cars eagerly waiting for buy-online-pickup-curbside purchases to be placed in their vehicle,” says Stephen Baker, vice president, industry advisor for The NPD Group.

“The retailers that use real-time data to understand individual consumer preferences, make changes the data shows are needed, and effectively leverage multiple channels will be much more successful in securing consumer spend this holiday season,” says John Nash, chief marketing and strategy officer at Redpoint Global.

“This holiday season will likely look different by location and region, due to the differing regulations regarding the virus,” saysAndrew Challenger, VP of Challenger, Gray & Christmas. “While the holidays are usually a time when retailers are desperate to attract crowds to their stores, one constant with COVID-19 precautions is that most stores are now concentrating on how to provide a safe shopping experience. While retailers may not know exactly how many workers to hire during this period to keep up with demand, they will likely need to create positions and tasks that are unprecedented, such as temperature takers, mask enforcers, and curbside workers.”

“With new research predicting a 1% to 1.5% increase in total U.S. consumer spending from November through January, and a 35% increase in seasonal online sales, the holiday period is primed to be the perfect opportunity for retailers to try and recapture lost revenue from a difficult year," says Lars Larsson, CEO at Varnish Software. "If retailers want to capitalize on 2020’s seasonal spike, they need to review their systems now and ensure their website can deliver the same speeds and quality of experience customers have come to expect, even at peak levels of traffic." 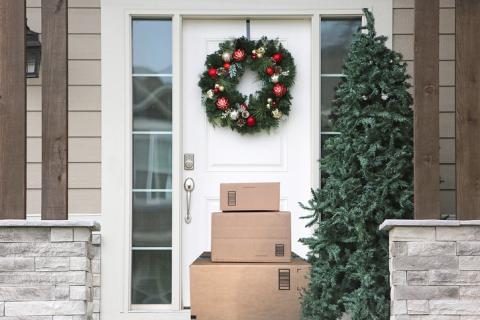 Holiday retail sales are likely to increase between 1% and 1.5%, according to Deloitte’s annual holiday retail forecast. Overall, Deloitte’s retail and distribution team projects that holiday spending will result in sales between $1,147 billion and $1,152 billion during the November-January timeframe. Deloitte’s retail and distribution team sees holiday sales playing out in one of two possible scenarios this season, a relatively stable year-over-year sales increase (0% to 1%) or a more significant jump (2.5% to 3.5%), both of which are lower than in years past, and will be driven by a K-shaped recovery. The formal forecast increase (between 1% and 1.5%) is a result of melding both scenarios.

Almost three-quarters of consumers (73%) said their overall holiday spending will either stay the same or increase this year, according to the PowerReviews Holiday Consumer Survey.

E-commerce sales will grow by 25% to 35%, year-over-year, during the 2020-2021 holiday season, compared to sales increasing by 14.7% in 2019, according to Deloitte’s annual holiday retail forecast. E-commerce holiday sales are expected to generate between $182 billion and $196 billion this season.

Online shopping volumes look set to be the highest of all time: 64% consumers say they will spend more online than last year, according to the PowerReviews Holiday Consumer Survey.

Seventy percent of U.S. consumers intend to make the majority of their holiday purchases online this year via web or mobile, according to a survey from Glassbox.

One in three U.S. consumers reported shopping online at least daily (34%) and one in five respondents (19%) said they shop the Web multiple times per day, according to Vertebrae’s consumer survey. The top three challenges with online shopping all relate to not being able to physically experience a product: Nearly 6 in 10 (59%) respondents say they are concerned about whether items will fit; 58% say they miss not being able to touch or feel products; and 56% say they didn’t know whether the item that’s delivered will look the same as advertised online.

When Americans over the age of 16 were asked when they thought they might feel comfortable shopping in person again, 27% responded, “I don’t know,” according to a SYKES survey. Nearly 44% of consumers won’t feel comfortable shopping in person until they feel COVID-19 is under control in the country or their area (21.68% and 21.97% respectively), while the remaining 25% are holding out for a vaccine. More than 41% of all respondents plan to purchase most of their items online this holiday season. 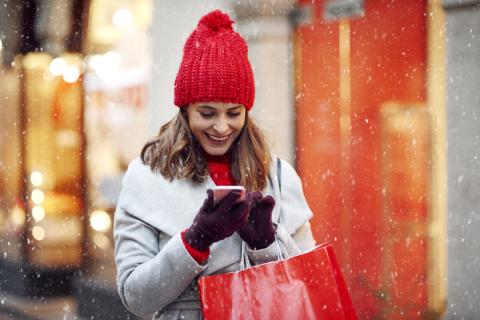 App Anniepredicts the biggest Q4 holiday shopping season on mobile yet — with nearly 1 billion hours to be spent on Android devices in the U.S., up 50% YoY. This Thanksgiving, grocery app usage will remain high as shoppers leverage apps for evaluating inventory, self-checkout and BOPIS.

eMarketer reports 37% of U.S. adults in a May 2020 Salesforce survey said they were more interested in mobile app shopping than they were last year, and 22% said the same about shopping via social media.

Buy Online Pickup in Store (BOPIS) and omnichannel has been trending for years now, but this holiday will be seminal for these shopping models; 55% of consumers say they will use curbside pickup more this year than they did last, according to the PowerReviews Holiday Consumer Survey.

Usage in click and collect has surged—specifically curbside pickup—which has allowed shoppers to make immediate purchases while minimizing human contact. eMarketer had previously forecast that U.S. click-and-collect e-commerce sales would increase by 38.6% this year. Now, it expects growth to be 60.4%, with sales reaching $58.52 billion.

Only a small number of retailers (39%) are proactively preparing their businesses for the holidays, according to a PayPal survey. One in five businesses claim their future is dependent on this year’s holiday results, but over half (57%) of retailers hadn’t started preparations at the time the survey was conducted.

Despite the impact of the pandemic on delivery times, 41% of shoppers say they don't plan to shop any earlier for holiday gifts, according to a Radialsurvey. Retailers should not expect order increases to be stretched out over longer periods of time; 39% of shoppers plan to start shopping for the holidays in October into early November, and 30% plan to start on Black Friday/Cyber Monday.

Fourty-two percent of shoppers would be encouraged to make an additional purchase this holiday season, with a small discount of 10%, according to a survey from Glassbox.

The ability to virtually place items in real-life environments (57%), virtually try on products (39%), and flip or spin digital renderings of items to inspect details (63%) all ranked higher than popular features like user generated ratings and reviews (31%) or personalized recommendations (15%), according to Vertebrae’s survey.

Non-fraud chargebacks continue to rise (up 17%), waving a major red flag for retailers ahead of the holiday shopping season, according to  ACI Worldwide.

Consumers (39%) say they get overwhelmed by marketing from retailers during the holidays, so striking the right balance of personalized communication at the cadence the customer prefers is as important as what the marketing materials say, according to a Dynata survey. Keeping stocked shelves digitally and physically is also important. Out of stock items remains a point of friction for many consumers during the holiday season, 36% rating it as a top frustration.

Given half of  merchants (52%) surveyed are unsure whether consumers will use fitting rooms to try on clothes, nearly forty percent (39%) are offering virtual alternatives, according to the PayPal survey. This includes online fit or sizing tools (26%), virtual showrooms (23%) and virtual stylists (23%).

“Free Shipping” outperforms other promotions, but isn’t the most frequently offered, according to Pattern89 data. After it analyzed billions of advertiser data points across Facebook and Instagram, it found there is a strategic advantage to promoting “free shipping” because it has the highest click-through rate (CTR) of other promotions (like 10% and 20% off), but is used less than other promotions. There is an opportunity for advertisers to boost CTR by offering free shipping, while having it serve as a more unique offer.