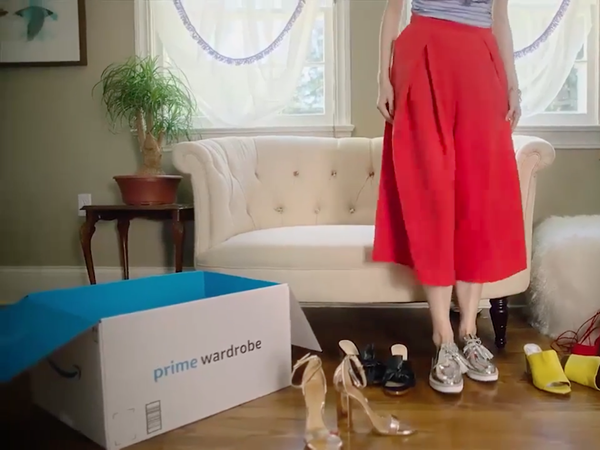 Everyone has been wondering what exactly Amazon has planned for fashion. There's even been a debate over whether Amazon can deliver "fashion" (aspirational) as opposed to apparel (essentials and basics), despite the company leading in terms of apparel sales by volume in the United States. Now, with the launch of Prime Wardrobe, the Seattle-based e-commerce giant is flexing its muscles and giving shoppers even more reasons to increase their Amazon wallet share.

Amazon Prime Wardrobe lets customers bundle any selection of three or more items from an assortment of more than 1 million products in its Amazon Fashion department into a Wardrobe order. Upon receipt, customers have seven days to try on the items in the comfort and convenience of their own homes, keep the products they love and ship back the rest or schedule a free pickup. Shoppers are incentivized to purchase, with a discount of 10 percent off three or four items and 20 percent off five items or more, similar to offers from other online styling subscription services such as Stitch Fix and Dia & Co.

Amazon's breadth of features and services could be the differentiator. "If both the Echo Look and Amazon Wardrobe can work together, users will be able to try their clothing before making the purchase, and have their own personal stylist telling them what does and doesn't work," says Michael Levine, vice president of marketing for Photon, an omnichannel digital experience provider. "Amazon could be providing their subscribers with an immersive 'in-store experience' from their own homes. This added touch could fill the gap often experienced with this try-on at home business model from companies like Trunk Club and Stitch Fix."

Shoppers have become increasingly comfortable buying a range of apparel products from Amazon. In recent years, apparel retailers have doubled down on their physical stores as the (lone?) advantage they have over e-commerce pure plays like Amazon. So is this Amazon's way of leveling the playing field?

Perhaps so, says RSR's managing partner Paula Rosenblum. "It strikes me that they're trying to establish some level of parity with brick-and-mortar retailers that have fitting rooms, and saving themselves some money by reducing the number of credit card transactions they're processing," she explains, describing Prime Wardrobe as "not sustainable" and "not disruptive." "I suspect that at their volumes, that's real money."

But Sahir Anand, managing vice president, research and strategy for Carbonview Research, a division of EnsembleIQ, points out that some brick-and-mortar apparel retailers that also operate online already have a flexible try-at-home policy, though it more along the lines of "we know that because you're purchasing three sizes of the same dress, you're going to return two."

Given how high apparel e-commerce returns are — roughly 30 percent of all purchases end up back where they started — it's improbable that Amazon hasn't crunched the numbers to determine the logistics and cost challenges that Prime Wardrobe brings, as all of those credit card reversals can start to add up. "I'm assuming they've covered their bases so that they're avoiding the ‘buy for a Bar Mitzvah and return after the event' syndrome," Rosenblum adds.

According to Anand, Amazon's prowess in assortment planning and pricing (and of course its top-notch consumer analytics) will help a service such as Prime Wardrobe succeed. However, the current trend of fashion going "down-market" — discounters and outlets are the retailers consistently winning with consumers today — could be an issue, he adds.

Then there’s the factor of Amazon’s patent for an on-demand apparel manufacturing system. How will that come into play? Will Amazon be able churn out best-selling Prime Wardrobe styles as needed without worrying about carrying excessive inventory?

Especially when coupled with the Whole Foods acquisition announced last week, it certainly does look like Amazon is gearing up to become the WALL-E-esque one-stop-shopping behemoth that caters to every consumer need. The company doesn't fail often but yet Rosenblum expects Prime Wardrobe to "die a quiet death sometime down the road."

Anand is more optimistic. Prime Wardrobe is a long-term strategy that won't be a "cakewalk" and will be especially interesting if iconic international fashion brands want to get into mix — which could help appeal to Amazon's Prime membership, which trends affluent (despite the recent addition of Prime for lower-income households).

Tying the service to Prime members only could be the key to success because, as Anand says, "the whole of Prime is that once you're in, you'll keep ordering."

And for some, Amazon's hardcharging history of dominating every arena it enters only bodes well for Wardrobe. "This service will be successful — there are no roadblocks for Amazon," says Adrien Nussenbaum, U.S. CEO and co-founder of Mirakl, a marketplace platform company. "Where they don't have expertise, they will build it quickly. As evidenced by Amazon Business which achieved $1 billion in sales in its first year, there is virtually no industry Amazon can't enter and disrupt drastically. They will quickly level the playing field on fashion expertise, and put Stitch Fix and Trunk Club at a significant disadvantage. These other brands offer concierge experiences, but they lack a seamless repurchase experience with extensive product selection. This frustrates their customers and Amazon will alleviate that frustration.

"The retail landscape has already been transformed by concierge services and by entering the concierge space, Amazon is further validating the demand," continues Nussenbaum. "It may even put the nail in the coffin for conventional retailers [that] don't offer significant product differentiation and can't keep up with Amazon's pace of innovation and ability to best serve customer demands. Combining the concierge experience with a seamless way to repurchase the same or similar products will be a successful endeavor for Amazon."