AWS posted $9 billion in sales and operating income of $2.26 billion, which is 71.6% of Amazon’s total operating profit. The biggest impact in Q3 in the AWS segment was tied to costs related to sales and marketing year-over-year and also to a secondary extent, infrastructure.

Amazon shares fell 7% in after-hours trading following the earnings news, knocking Amazon CEO Jeff Bezos out of his title as the richest man in the world, according to Forbes, and relinquishing the top spot to Microsoft cofounder Bill Gates.

“We are ramping up to make our 25th holiday season the best ever for Prime customers — with millions of products available for free one-day delivery,” said Bezos in in a press release. “It’s a big investment, and it’s the right long-term decision for customers. And although it’s counterintuitive, the fastest delivery speeds generate the least carbon emissions because these products ship from fulfillment centers very close to the customer — it simply becomes impractical to use air or long ground routes.”

The Amazon Hub Counter service, available to all Amazon customers at no extra cost, allows shoppers to pick up their Amazon orders in retail stores.

Delivery to a Counter location works with Same-Day, One-Day, Two-Day and Standard Shipping. As soon as their package arrives at the store, customers receive an e-mail notification with a unique barcode. At the store, staff scan the barcode and retrieve the package. 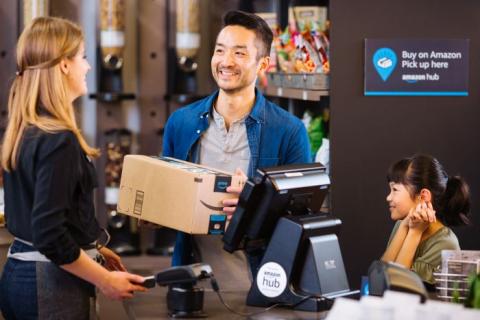 “The response we’ve heard from our customers and partners after the launch of Counter earlier this year has been tremendous,” explains Patrick Supanc, Worldwide Director of Amazon Hub. “This new network of pickup points gives customers a pickup experience that is fast, flexible and convenient, and partners are thrilled with the strong engagement and additional foot traffic Counter is driving for their stores.”

Amazon designed and built the technology for Counter from the ground-up, which easily turns a store of any size into a pickup location.

As Amazon’s logistics network continues to grow, the company is enabling delivery at even faster speeds, and in the most convenient locations. The company has been trialing Amazon Hub Counter with GNC, Health Mart and Stage Stages for the last few months.

“For six years, my pharmacy team has served our community and made sure our patients get the care they need,” said Laura Temple, RPh, pharmacist and owner of Laura’s Health Mart Pharmacy in Azle, Texas. “Amazon Hub Counter has given my current patients a new, convenient way to pick up their Amazon packages, and it’s also brought in new neighbors who have then been introduced to the meaningful care at my pharmacy. I’m delighted to offer Counter in my local store.”