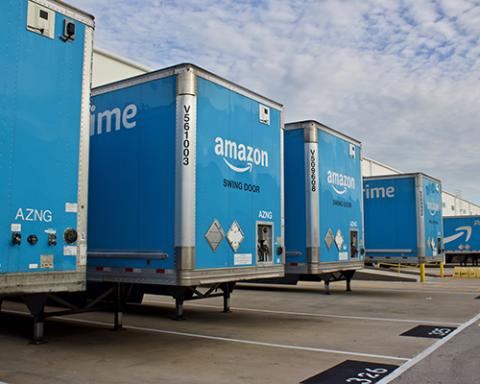 Amazon reported net sales of $88.9 billion in the second quarter, up 40% from $63.4 billion last year, in what founder and CEO Jeff Bezos called “another highly unusual quarter.”

Unusual perhaps, but hardly surprising for the No. 2 retailer.

Online grocery sales tripled in Q2 vs. the prior-year period, and the retailer increased grocery delivery capacity by more than 160%. It also tripled grocery pickup locations during the quarter in order to meet the escalated demand prompted by COVID-19.

Putting Amazon a bit more in line with the rest of retail is that it reported year-over-year store sales declines of 13%. Store sales for the quarter were $3.77 billion, down from last year’s $4.33 billion; however, it’s worth noting that Amazon breaks out store sales quite literally — delivery or other click-to-collect orders are excluded from this segment, and it only includes sales made physically within the store.

Amazon also invested $9.4 billion in capital expenditures and finance leases in the second quarter, a year-over-year increase of 65%, primarily driven by fulfillment and logistics investments.

The retailer — which has created over 175,000 new jobs since the start of the pandemic, with 125,000 of them being developed into full-time positions —now employs more than 1 million combined regular and seasonal employees. Notably, it’s piloting 20 medical facilities with Crossover Health in Texas, Arizona, Kentucky, Michigan and California that are available for its associates and their families.

AWS was also busy during the quarter, introducing such managed services as Amazon Honeycode, which lets customers build mobile and web apps with no programming required, and IoT SiteWise, which collects data from a plant floor, structures and labels the data, and generates real-time KPIs and metrics to help customers make data-driven decisions.

AWS’ new Amazon Interactive Video Service, meanwhile, is a managed service that uses the same technology powering Twitch. Customers can use set up live, interactive video streams for web or mobile apps that can be delivered to millions of concurrent viewers globally with such interactive features as virtual chat spaces, votes and polls, moderated Q&As and synchronized promotional elements.

As a result, AWS is seeing migration plans accelerate. “They’re certainly not going to happen overnight, but we see companies moving more in that direction,” he said. “We think that will be a good long-term trend. And there’s certainly winners in this area right now, things like video conferencing, gaming, remote learning and entertainment. All are seeing usage growth. And it’s a bifurcated world out there."