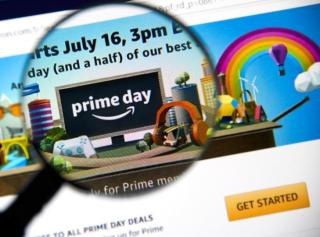 Now in its fourth year, the big news out of Amazon’s annual Prime Day event has taken a drastic shift. Traditionally, the days following the massive flash sale is filled with reports highlighting Amazon’s latest record-breaking sales numbers, but this year the back-patting narratives have taken a negative spin.

The seemingly bulletproof retailer walked away from its signature event with a few chinks in its armor after the website crashed when the curtain raised on the event at 3 pm Monday July 16. Shoppers who flooded to the site to get their first glimpse of the sales blitz were greeted with a static Prime Day image and when they clicked Shop All Deals to enter, the website was unresponsive. After repeated attempts to view the deals shoppers were presented with the below message ― not exactly the best way to kick off one of the most highly anticipated online shopping days of the year. 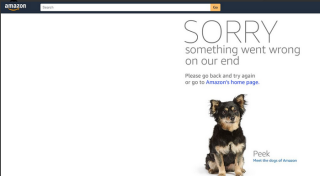 Prime Day shoppers encountered this disappointing message when they tried to shop.

"Some customers are having difficulty shopping, and we’re working to resolve this issue quickly," the company said in a statement as the disaster unfolded. "Many are shopping successfully – in the first hour of Prime Day in the U.S., customers have ordered more items compared to the first hour last year. There are hundreds of thousands of deals to come and more than 34 hours to shop Prime Day."

The bulk of the issues occurred during the first hour of the sale, with both its website and mobile app returning to full functionality after the initial hiccup ― although there are reports of shoppers experiencing extreme slowdowns and site crashes throughout the day and a half event.

While the functionality stumble will likely become a minor footnote on Amazon’s continued march toward retail domination, it is noteworthy and could have an impact on 2018 Prime Day results and the online giant’s public image.

“While Amazon has done well to cultivate strong brand loyalty through its seamless shopping experience and conveniences like free shipping, this Prime Day "black eye" will no doubt resonate with customers,” said Jeff Cheal, director of product strategy, personalization, campaign and analytics,  Episerver. “Our experience and research shows that customers are quick to jump ship if an online shopping experience doesn't live up to these new standards, even with sites they are previously familiar with. If Prime members can't shop for the deals they were promised on Prime Day ― Amazon’s highly-publicized bell ringing event ― it means Amazon has fumbled in delivering on the very premise that has made it into the retail juggernaut it is today.”

Despite the hiccup, Amazon reports that Prime Day 2018 was once again a rousing success both from a revenue and website traffic perspective. “On a day (and a half) with more than one million deals worldwide offered exclusively to Prime members, sales this Prime Day surpassed Cyber Monday, Black Friday and the previous Prime Day, when comparing 36-hour periods, making this once again the biggest shopping event in Amazon history,” Amazon said in a prepared statement.

In just four short years, Prime Day has transitioned from a relatively small event to a massive undertaking that has forever altered the retail landscape. Competitors both big and small are adopting the flash sale approach and leveraging the media hype around the event to launch their own sales days.

“Large retailers like Target and Walmart have announced big one-day or week-long sales on their online and brick and mortar outlets, timed around Prime Day,” said Mary Lou Barney, VP, Client Success, Fuel Cycle. “A completely different competitive response is underway by small brick-and-mortar stores. For them, the push is akin to the Small Business Saturday or Shop Small initiatives of the holiday shopping season. They are connecting with their communities to personalize the shopping experience and the choice to support local business.”

Mihir Kittur, chief commercial officer, Ugam echoes Barney’s sentiment. “This is the first year where Prime Day is spreading widely to other e-retailers and officially becoming an industry-wide event, sort of like a new version of Cyber Monday,” he said. “In the past, it was only Walmart and maybe a couple other competitors that pushed deals in response to Amazon’s. This year, however, we’re seeing numerous other players actively promoting sales to try to carve out their own slice of the event.”

While retailers both big and small are looking to piggyback on the Amazon hype wave surrounding Prime Day, others are taking a different approach, opting instead to try and claim their own piece of the retail calendar.

“Retailers should not try to beat Amazon at its own game,” said Guy Yehiav, CEO, Profitect. “It’s best to avoid holding flash sales during the month of July, when Prime Day hype is highest, to avoid getting lost in the mix. Furthermore, retailers shouldn’t discount the same types of items Amazon is promoting, as the market will already be saturated.”

Regardless of their approach, one thing is clear ― Prime Day cannot be ignored. It has captured the hearts, minds and wallets of shoppers and elevated itself to the vaulted position of “retail experience” ― this year’s website issues notwithstanding.