Andy Dunn is leaving Walmart. The founder of Bonobos and current SVP of digital consumer brands at Walmart, announced on Linkedin that he will be departing the mega retailer early next year.

In the Linkedin post which he titled “A Love Letter to Walmart,” the executive praised his current, employer noting that the company is “obsessed” with delivering a better life for its core customers.

“The more I fell in love with that mission, the more I came to understand what Walmart does in America and around the world as a moral imperative,” Dunn wrote.  “When it comes to making the world a better place, the world's largest company is, 57 years later, just getting started. It's a credit to the remarkable teamwork of 2.4 million of the hardest working people on planet Earth, all working together."

Dunn spoke with RIS earlier this year during the RetailX conference and expanded on his belief that e-commerce is not enough. You can check out the full conversation here.

"After more than two years innovating new, incubated brands and bringing on important acquired brands, as an entrepreneur at heart, Andy Dunn has decided now is the right time to take the next steps in his career," a Walmart spokesperson said in a prepared statement. “[Andy] will work closely with merchandising and brand leadership to ensure a smooth and successful transition.”

Below is Dunn’s full Linkedin post announcing his departure:

When I joined Walmart in the summer of 2017, my goal was to leave the company better than I found it. With my last day coming up early next year, it's time to take stock.

It’s such a formidable and massive enterprise, it’s hard to take measure of such an objective. So much goes into making Walmart work. Individual contributions blur, and it quickly becomes clear that teams are what make the world go round.

What I am certain of is how much I gained from my time at Walmart. I learned a lot more about retail transformation in the digital age at the world’s biggest company. I watched our strategy evolve as we uncorked our unique advantages on a new omni playing field – and began to identify where we aren’t just catching up, but where we are winning. The momentum with online grocery pickup opened my eyes: our thousands of supercenters are an asset nobody else has, so let’s use them. In our digital brands group, that led to development of a strategy built on omni, as we married our talent with the power of Walmart distribution to build brands like Allswell. With my departure, that incubator will now be plugged directly into the Walmart mothership.

I learned about the enormous power of a culture built with a singular focus: the customer. While I thought I understood it, I didn’t. Walmart is obsessed with delivering a better life for its core customers. The motto is everywhere, written in four simple words: save money, live better. That mandate has expanded to saving the customer time. Sam Walton’s customer focus is printed indelibly on the company, from the sayings on the walls to the last sentence of the famous Walmart cheer. The more I fell in love with that mission, the more I came to understand what Walmart does in America and around the world as a moral imperative. With this in mind, we acquired ELOQUII, a leading plus size fashion company committed to serving a customer who deserves better.

I learned about courage and leadership. When a mass shooting struck our El Paso store, I saw us take care of our customers and our employees, first, and then make an important move in fully exiting the handgun and handgun ammunition businesses, asking customers to refrain from open carry in stores, and open sourcing our background check capabilities. Overseeing digital brands at the company, I saw how far ahead Walmart is on its sustainability practices. We partnered to deepen the momentum. When I got tapped on the shoulder to join the board of the Network for Executive Women, representing Walmart, I jumped at the chance, and it’s been an honor to stop talking, start listening, and do the work of building a more diverse and inclusive future.

It’s a testament to what kind of company Walmart is that I entered thinking mostly about what I could offer, and ended up being the one who received so much. When it comes to making the world a better place, the world’s largest company is, 57 years later, just getting started. It’s a credit to the remarkable teamwork of 2.4 million of the hardest working people on planet Earth, all working together. As Sam said, the fact that we’re all in this together is the secret. At Walmart, it’s hidden in plain sight. 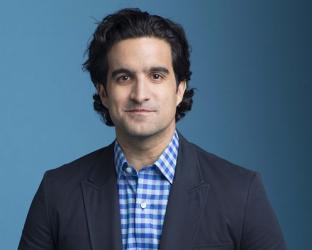 The founder of Bonobos and current Walmart SVP made some provocative statements when he kicked off RetailX this week. Following his keynote presentation he sat down with RIS for an exclusive interview and expanded on his unique take on the state of e-commerce.