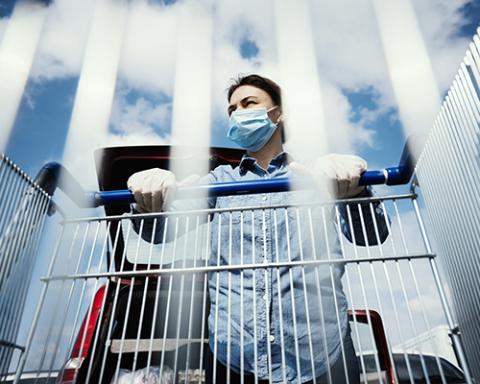 Retail and food service sales decreased 16.4% from March to April, according to U.S. Census Bureau figures, plummeting an historic 21.6% year over year.

While the numbers weren’t unanticipated, they still served as a stark confirmation of the disruption wrought by the spread of COVID-19.

“These retail sales numbers are not a surprise given the current state of affairs,” said National Retail Federation president and CEO Matthew Shay. “The vast majority of retail stores have been closed, we are in the midst of historic unemployment, and when it comes to personal finances, discretionary spending takes a backseat to essentials.”

Clothing and clothing accessories stores were hit the hardest, falling a staggering 89.3% year over year as a result of widespread store closures. For some context, in April 2019 it took clothing retailers just three days to generate as much revenue as they did for the entire month of April 2020, said Neil Saunders, managing director of retail at analytics and consulting firm GlobalData, in a research note.

“While there were a few bright spots, most notably from athleisure and comfort clothing, consumers simply turned their backs on fashion in April,” he said.

Indeed, some apparel retailers and department stores that were already stressed as they tried to transform their omnichannel selling were pushed over the edge by the health crisis. JCPenney filed for Chapter 11 bankruptcy protection last week, joining Neiman Marcus Group and J. Crew Group.

Also hit hard in April were furniture and home furnishings (down 66.5% year over year) and electronics stores (down 64.8%).

“The boost in electronic accessories to aid working from home was nowhere near enough to offset the shunning of other areas of the mix, including phones, televisions and appliances,” Saunders said.

The lone bright spots were e-commerce sales (up 21.6% vs. last year) and food and beverage stores (up 12%); however, the e-commerce growth wasn’t enough to compensate for the widespread store closures.

“Many retailers are trying to pivot to online to help mitigate the decline in sales from physical stores. This is only partially successful,” Saunders told RIS. “As stores reopen, we are seeing the development of a lot of omnichannel solutions such as buy-online-and pickup-curbside.”

While Saunders said April is likely the lowest point of declining sales for retail as consumers return to stores in May, re-opening remains slow and many consumers are strapped for cash.

“As such, May will not be a month of celebration. Nor will June. Nor July. Nor probably the rest of this year,” he said. “Retail’s recovery will be slow and, in our view, it won’t be until 2021 before trade starts to return to more normal patterns.”

Shay cited the retail records that were being set in year-over-year growth, employment and investment prior to the pandemic. “It is a resilient industry serving a smart consumer, and despite today’s report, we know it will be leading our nation’s economic recovery as this crisis recedes,” he said.

See also:How the Coronavirus Will Shape Retail Over the Next 3-5 Years