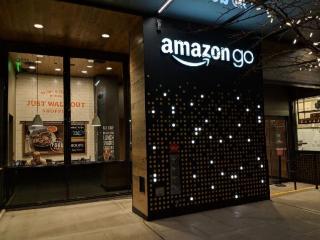 According to multiple reports Microsoft is building an Amazon Go like solution.

As Amazon continues to scale its cashierless store concept, many solution providers are developing similar technology to capitalize on and advance the new shopping craze. Last week rumors began flying that Microsoft is developing a solution to track what shoppers place in their carts as they move throughout the four walls of the store, and that Walmart is first in line to receive the new technology when it becomes available.

While Microsoft has yet to confirm the development of an Amazon Go like offering, that hasn’t stopped the industry from speculating on what Microsoft’s solution might feature.

It was reported that Microsoft is taking a Smart Basket approach, but according to Standard Cognition’s co-founder Michael Suswal that “technology came and went in 2016.” And he would “be surprised if Microsoft went down that route." Another rumor foretold that the mysterious tech might operate via a handheld scanner or smartphone app, which Suswal also believes is unlikely. "Walmart recently killed its Scan & Go pilot, due to low customer participation. Most retailers are moving away from this approach, not toward it."

Most likely, the solution will leverage computer vision to not only monitor shopper flow throughout the store, but also track with pinpoint accuracy every item they drop into their carts. Computer vision tracking technology is available today, but few companies have been able to leverage it for commerce/POS applications.

“What made Amazon Go unique is that it was the first retailer to put it out there for consumers to use and try,” says Nikki Baird, vice president of Retail Innovation, Aptos. “Any retailer, with the budget and intestinal fortitude, can do what Go does today, and could have beat Amazon to market with it. But they didn’t. Microsoft, in bringing something similar to market, is merely underscoring that the technology is not revolutionary.”

Not all industry pundits agree with Baird’s assessment that Amazon Go and the upcoming Microsoft offering are not groundbreaking. In fact, many believe that the cashierless craze is here to stay and will forever alter the look and feel of the brick-and-mortar experience.

“I believe that in three to five years, traditional checkout lanes will become somewhat of a relic,” says Michael Jaszczyk, CEO, GK Software USA. “We will have a hard time remembering what it was even like to stand in line at the POS.”

While the technological development and debate rages on, leading retail minds like Baird and Jaszczyk agreed to share their thoughts on the subject. Below is a look at some of the most interesting commentary:

"This concept is not something knew. Walmart was experimenting with cashierless checkout nearly a decade ago. But now the data is so much more valuable. Amazon Go is more about trying to see what the trends are then selling cans off coke. The cameras record what customers are wearing, what time they come in, etc. From there Amazon can use that information across the enterprise. It’s all about data and analytics."

"No one should jump to the conclusion that cashierless checkout is expected by consumers. Retailers, no matter the goods they sell, need to pay attention to pain points in their customers’ journeys, and turn those pain points into opportunities for delight. That might mean cashierless, or it might even mean more cashiers. Every retailer’s customer expectations will be different. That’s where the real opportunities lie in retail, is in taking advantage of those differences."

"Instead of being intimidated by companies like Amazon and Microsoft putting a stake in the ground in physical retail, brands and retailers need to recognize what this means about the industry and today’s consumers, and to rethink store formats and processes accordingly. For example, shoppers accustomed to the speed and ease of e-commerce — and now the convenience of Amazon and Microsoft’s initiatives in stores — expect all in-store shopping to be similarly quick and efficient. But they’re not always getting that experience."

"Microsoft taking on Amazon with cashierless checkout demonstrates how close we are to a breakout of alternative ‘checkout and scanning’ processes and applications. We’re beginning to see more and more companies like Microsoft react to Amazon’s lead, all working to implement this type of technology. The question now is not if, but when we will see wide range adoption in the market. As more vendors offer these types of self-scanning solutions and retailers pilot them in their stores, consumer demand will follow as well as increased store revenue."