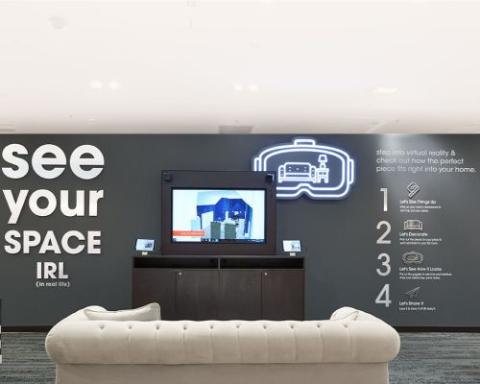 In select Macy's stores, shoppers can use a VR headset to see how a space looks with furniture in it.

Retailers often use virtual reality (VR) and artificial intelligence (AI) to attract shoppers, but do any benefits make it worthwhile for the stores to offer on-site experiences? Let's find out.

Audi Finds Success With Its VR Experience
Most websites for leading automotive brands include car-creation components that allow people to research the available features and add them to virtual cars. Such capabilities make things convenient for those who are in the market for cars, but they make it less necessary to go into dealerships to learn about the vehicles.

Some car retailers have implemented showroom-based VR experiences to appeal to the millennial market and that generation's buying power. Other platforms allow people to communicate with dealership representatives at home. In these cases, dealers start building relationships from a distance but ultimately encourage people to shop in person. This use of VR supplements the physical buying experience instead of replacing it.

Audi brought VR into dealerships in 2015 and discussed how salespersons at those locations could explain the various cars in the inventory after customers donned VR headsets. Customization of chosen automobiles is also possible.

After going through a 16-location European dealership trial, the brand expanded to 200 dealerships. According to content published in late 2018, 1,000 Audi dealerships around the world offer VR. The increase over time suggests that VR paid off for Audi.

Concerning AI across all car dealerships, chatbots are useful for many of them because they keep people engaged and more likely to walk into dealerships. A survey found that 89% of respondents want to use instant messaging to communicate with businesses. A chatbot could streamline the early stages of the car-buying experience, such as pre-qualification for loans.

It appears that there's a disconnect between the effects retail executives believe VR and AI should have and the actual impacts on sales. This finding is the result of a recent survey about the two technologies.

Firstly, 79% of the retail leaders polled thought AI and VR would cause purchasing increases, but only 14% of shoppers said the tech advancements had a significant impact on what they bought. Plus, 2% fewer said the tools affected brand impressions.

Retailers should track whether augmented reality (AR) and VR users make purchases or if they're only coming into stores to try the tech and leaving empty-handed. Numerous brick-and-mortar stores tried VR and AR and found it beneficial in a landscape where people are increasingly encouraged to shop online.

Not long ago, Macy's deployed a VR solution to urge people to buy furniture in its stores. During a pilot rollout where people put on headsets and got virtual glimpses of furniture, the retailer found that VR made the average purchase total of those shoppers increase by an average of 60%, and the rate of returns on those purchases was less than 2%.

VR also permits Macy's to sell a bigger selection of furniture than before since virtual representations of furniture don't take up valuable floor space. Like Audi, Macy's gradually brought VR to more stores over time.

The brand used AI to help in-store shoppers too. In 2016, offered Macy's On Call, which allowed people to ask store-specific questions with their smartphones. The service got smarter over time.

In the early stages of availability for any technology, it's often difficult to assess the payoffs, and it's especially challenging to do so concerning applications related to VR and AR. Another survey published in 2018 found that 48% of those polled would be more likely to shop at stores offering AR and VR.

Retailers might find that VR and AI help increase their tech-centric images and cater to what customers want, but as the earlier survey showed, the tech doesn't necessarily make people buy more.

The information here indicates that retailers should not assume AI and VR equal guaranteed upward shifts in sales. However, the tools are worthwhile in some cases, primarily when they're used strategically.

-Kayla Matthews writes about real-time technology, automation and the Internet of Things for publications like Marketing Dive, IoT For All, PR Newswire and InformationWeek, among other publications. To read more from Kayla, connect with her on LinkedIn and cite this website in your introduction email.