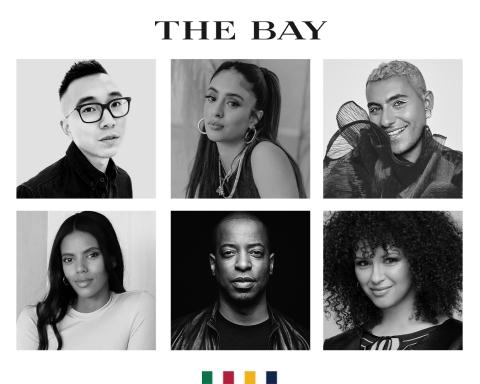 The Bay has announced the Advisory Board members of its newly developed The Bay Fashion Fund, comprising some of the country’s leading industry and societal change-makers.

Canada’s Hudson’s Bay operates 85 full-line locations and The Bay operates thebay.com featuring Marketplace, the 6th largest e-commerce business in Canada.  Announced earlier this year, The Fashion Fund is an initiative that will both mentor and support up-and-coming BIPOC designers in Canada.

Vanessa Craft, Mina Gerges, Sandy Kaur Gill, Grace Mahary, Corey Ng and George Sully will all serve on the Board, steering the criteria, application and selection process for the successful Fashion Fund recipient.

Each year, beginning May 2022, The Fashion Fund will award one BIPOC designer with a $25,000 grant, in addition to an extensive three-year mentorship program to help build brand and alleviate some of the obstacles designers face when entering the competitive retail landscape. The goal of The Fashion Fund is to support Canada’s talented and emerging BIPOC designers through long-term support and access to mentorship in addition to the financial contribution. The Fashion Fund Advisory Board members will work with The Bay to conceptualize and steer the developmental stages of the initiative to ensure a robust and successful program.

“It is our honor to introduce The Bay Fashion Fund’s Advisory Board, which comprises six incredibly talented individuals,” says Tyler Franch, VP Fashion Director at The Bay. “Each board member brings a wealth of knowledge and invaluable expertise in their respective field. We are excited to nurture the diverse design talent we have in Canada and support their development with this accomplished group.”

The Bay Fashion Fund plays an integral role in The Bay’s extensive work to accelerate racial equity in Canada, and was announced following the launch of the Hudson’s Bay Foundation’s social impact platform, Hudson’s Bay Charter for Change.

Additional information on candidate criteria and the application process will be shared in the coming months.

About The Bay Fashion Fund Advisory Board Members

Vanessa Craft leads high-performance teams, builds engaged communities and directs game-changing content. Her work connects and inspires through a core belief in inclusion, authentic storytelling and championing next-gen talent. In her current role as Head of Content Partnerships at TikTok Canada, Vanessa oversees content strategy, acquisition and management of the platform’s community of Creators, Media Publishers and Public Figures. Previously, Vanessa was the Editor-in-Chief at ELLE Canada—the first black woman across 44 global editions to hold this title. Under her leadership, she increased the diversity of voices, content and cover stars in the magazine and grew readership in print and digital by over 35%. Vanessa was recently named on Variety’s 2021 Global Entertainment Impact List.

Mina Gerges is an Egyptian plus-size model, actor, and TV personality. Known for his fearless self-expression, colourful style, and bold makeup looks, he's built his vibrant career on the principle that being your authentic self is your superpower. An outspoken advocate for change and inclusivity, he is committed to creating meaningful representation in the fashion world and to building a new inclusive future where everyone belongs.

Sandy Kaur Gill (SKG) also known as TheSandyLion is a stylist and designer with the goal of helping people look and feel the best about themselves. Sandy’s clients include Lilly Singh, Beena Minhaj, Deepica Mutyala, Utkarsh Ambedkar, and Salone Monet. Her brand Tuff Bandit is a collection of her various designs and is her way of storytelling. As a child of an immigrant, WOC and Punjabi POC, she focuses on stories of resilience, love and learning. While recently her focus has been comfort wear, she gained notoriety for her SandySuit, a power suit made of traditional Indian fabrics. Sandy is also an elementary school teacher, who has written two of her own children's books.

Eritrean-Canadian model, sommelier and global activist Grace Mahary was discovered while shopping with her mother in Toronto. She has walked runway shows for the most notable names including Chanel, Christian Dior, Valentino and Balenciaga. Focused on being an agent of change, Grace founded Project Tsehigh (PjT) in 2015, with a mission to provide uninterrupted and sustainable electricity to developing communities in Eritrea, Tanzania and more. Believing in a purpose bigger than herself and leveraging her platform as a model, Grace’s vision is clear: to help equip communities with the resources and well-being they need to succeed.

​​Ottawa native, Corey Ng, is an award-winning stylist who has worked alongside some of the country's most reputable names. His authentic, timeless and elevated aesthetic has inspired his work as a stylist, creative director, design consultant, fashion editor, and television style expert. His work has been seen in the pages of Vanity Fair, L'Officiel, ELLE Canada, and FASHION Canada, and his celebrity clients include Cole Sprouse, Winnie Harlow, Antoni Porowski, Chiara Ferragni, and Serge Ibaka. Corey was awarded Stylist of the Year at the 2021 Canadian Arts & Fashion Awards.

FGI Visionary Award Winner, George Sully is best known as the original maker of the Star-Trek Discovery Starfleet boot. Sully is also a Bata Shoe Museum inductee, creator of Black Designers of Canada, co-founder of House of Hayla and newly minted accessory brand Sully & Son Co., which can be found on thebay.com and in Hudson’s Bay stores.