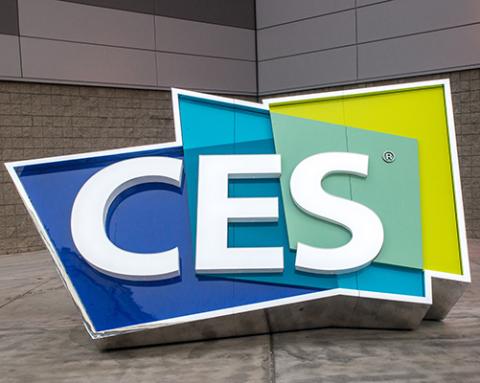 More than 1,600 exhibitors are already confirmed to exhibit at CES 2022.

When it comes to consumer comfort with artificial intelligence, today’s retailers might be happy to learn that shopping tops the list.

Out of the top 10 AI-powered tasks consumers said they most open to, making shopping and purchase recommendations was No. 1 in a recent survey, with 78% of consumers saying they were very or somewhat open to it. This willingness for AI in everyday tasks even topped such things as cleaning homes and cooking meals.

That detail was among the information shared by the Consumer Technology Association last week in its annual media preview of CES, the tech show juggernaut the trade association produces in Las Vegas every January (except, of course, when interrupted by pandemics).

As part of the preview, CTA shared early findings from its Consumer Tech Industry Forecast and Holiday Purchase Patterns Report, anticipating that consumer tech retail sales will grow 7.5% this year to $487 billion, and 2.2% in 2022 to $498 billion.

“A lot of U.S. households are making more investments in their tech,” said Lesley Rohrbaugh, CTA director of research, including for entertainment, remote work and smart home tech. About 196 million U.S. adults are planning to install some sort of smart home tech over next 12 months.

Looking toward the holidays, 86% of Thanksgiving-week shoppers — from Thanksgiving to Cyber Monday — plan to purchase tech products, with 95% planning to shop in stores and 93% online. Shoppers, on average, plan to spend an estimated $541 on technology gifts.

When it comes to leveraging tech during the shopper journey:

All in all, fourth-quarter spending on consumer technology is estimated to increase half a percent from last year, to $142.5 billion — a figure that pales in comparison with the nearly 11% growth recorded during last year’s holiday season.

CTA also shared information about the upcoming CES 2022, set to take place Jan. 5-8.  Although last year’s show was completely virtual, the 2022 event will feature both virtual and in-person components — though not all content will be available online, and exhibitors must have a show floor presence in order to be featured on the digital platform.

Held for more than 50 years, CES has evolved from a trade show focused primarily on hardware into a sprawling experience showcasing nearly all technologies with the potential to impact humanity. As part of this progression, the 2022 event will feature Robert Ford, Abbott president and CEO, as a keynoter, and CTA has teamed with the World Bank Group for the Global Women’s HealthTech Awards to identify innovative technologies addressing gaps in women’s healthcare and safety in emerging markets.

Other speakers include John Foley, Peloton CEO and founder; Jong-Hee (JH) Han, Samsung Electronics president of visual display; and Mary Barra, General Motors chair and CEO, while new categories on the show floor will include both food technology and fintech.

More than 1,600 exhibitors are already confirmed to exhibit, including Procter & Gamble, L’Oreal and John Deere, and Jean Foster, CTA senior VP of marketing and communications, noted to RIS the increasing draw of the show for CPGs as they evolve into tech companies.

With P&G, for example, the company positions itself as a tech brand, Foster said, and exhibiting at CES enables them to both showcase their tech innovations to retailers, as well as expand the brand through partnerships, including through its annual Innovation Challenge for startups.

Retailers that have committed to attending the show include Best Buy, Costco, Walgreens, QVC, Staples and BrandsMart, among others, with the draw of the show centering around the ability to do business efficiently. And while the show will look much different this year — expect fewer people and much more space — the feedback its organizers say they’ve received from both exhibitors and speakers has thus far been overwhelmingly positive.

For many global companies, the show may prove to a chance for them to bring everyone together for the first time.

“CEOs want to get to CES to not only see customers in a very efficient and environmentally friendly way, but they also want to see their own employees,” said Gary Shapiro, CTA president and CEO.