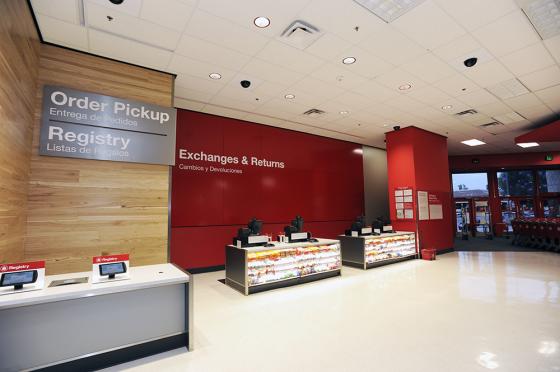 Target’s Store Pickup plus Drive Up was up more than 60% from a year ago, and accounted for a quarter of the company’s digital sales in the holiday period

Target saw shoppers flock to both stores and its website over the holiday season. Now the big box retailer is reinvesting in its workforce, making immediate changes to its leadership team to accelerate progress and drive efficiencies.

Target said same-store sales rose 5.7%. during the November/December holiday shopping period on top of last year’s increase of 3.4% over the same period. The results put Target on track to deliver the company’s strongest full-year comparable sales growth in 13 years, it said.

“We are very pleased with Target’s holiday season performance, which came on top of really strong results in the same period last year,” said Brian Cornell, chairman and CEO. “This performance demonstrates the benefit of placing our stores at the center of every way we serve our guests, including both in-store shopping and digital fulfillment.”

Results reflected strong traffic and comparable digital sales growth of 29%. Target expects that 2018 will be the fifth consecutive year in which its digital sales grow more than 25%. Demonstrating shoppers are increasingly both shopping online and visiting the store, Target’s Store Pickup plus Drive Up was up more than 60% from a year ago, and accounted for a quarter of the company’s digital sales in those two months.

For More on Target

Target has reported unprecedented results as it sees early benefits of planned large-scale investments in a wide range of strategic initiatives. In a Main Stage fireside chat at NRF 2019, “More in store: Target invests in its guests and its future,” Target CEO Brian Cornell will discuss how his organization is reimagining its stores, reinventing its brands and reinvesting in its workforce, while successfully navigating one of the most profound periods of change the industry’s ever seen.

For more on NRF's yearly expo, check out the RIS editors guide "Next Stop: the NRF Big Show" and get a short glimpse into the speakers and sessions that will define The Big Show 2019.

On the heels of this success, Target has now made several retail leadership changes, but most notably it has given CIO Mike McNamara more responsibilities after his success transforming Target’s approach to its information technology strategy, team and operating systems.

McNamara will now lead the Enterprise Data Analytics and Business Intelligence team, in addition to his leadership of Target’s Technology Services. Under McNamara’s leadership, the team will continue to provide data-driven counsel and expertise to enterprise business partners. McNamara joined Target in 2015 after serving in various roles with European-based retailer Tesco.

Target also revealed that CFO Cathy Smith will be retiring. Smith will continue until her successor is named, and then move to an advisory role until May 2020 to ensure a smooth transition. Target is conducting a comprehensive internal and external search for its next CFO and a search firm has been retained to assist in the process.

“On behalf of our Board of Directors and Target’s entire team, I want to thank Cathy for her leadership and valuable contributions since joining the company in 2015,” said Cornell. “Cathy’s deep expertise and leadership helped usher in strategic change for Target and positioned us for sustainable, long-term growth.”

“I’m proud of the team’s accomplishments and all the progress we’ve made. I am excited about what is in store for Target and myself as I plan for retirement, including freeing up more time for my family,” said Smith.