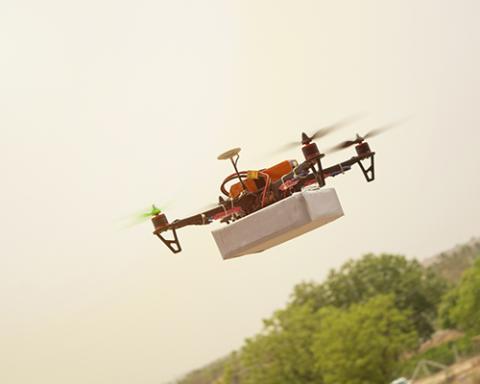 It is estimated that around 70 countries have introduced mandatory quarantines and lockdowns in response to the coronavirus pandemic as world governments continue in their efforts to reduce the spread of infection. The fear of becoming infected with the virus together with strict rules mandating that people self-isolate has led to a surge in online retail during the crisis.

The U.K. online grocery market is anticipated to grow by 25.5% in 2020 and online spending in the U.S. has already increased by 40% compared to last year. However, many businesses are now faced with logistical challenges of delivering goods in an environment where social distancing may become the norm, and the need to protect employees from the risk of diseases may prompt governments to fast-track the adoption of drones as a contactless last-mile option.

Drone deliveries during the pandemic

Drones have been expected to penetrate the market for some time (Amazon launched its Prime Air drone delivery service in 2019) but regulatory challenges and a perceived threat to privacy and airspace security have stalled their deployment in many countries. During the pandemic, some countries have found them invaluable to deliver medical supplies, essential items and personal protective equipment which could accelerate their use in e-commerce.

The U.K. government announced a £28m funding package to facilitate the deployment of drones and trials have recently been fast-tracked indicating that their use may become prevalent much earlier than anticipated. Wing (the company developed by Google) has implemented drones throughout the pandemic to deliver supermarket items, takeaway food and medical supplies to U.S. residents, and the company is currently trialling drone usage in Australia and Finland. The relatively deserted streets and a reduction in air traffic means that the time could never be better for drones to be tested and developed.

It is anticipated that drones could substantially reduce delivery time, drive down costs and provide a safe form of transport. GPS World has reported that drone deliveries in China have increased transport speeds by more than 50% in comparison to road transport and Gartner advises that operational costs associated with last-mile deliveries can be reduced by up to 70%.

Given that drones are controlled remotely, they have the added advantage of reducing exposure to viruses. As people spend more time at home and expect quick deliveries, drones can be used as a premium service to deliver online shopping straight to their doors without risk of human-to-human contact. In order to remain competitive in a rapidly evolving market, businesses could therefore meet consumer needs by investing in drone technology.

The Federal Aviation Administration (FAA) differentiates between drone use in the commercial, recreation, and public safety and government sectors. Part 107 of the FAA Rules regulates non-recreation use of drones and requires registration and marking of drones weighing more than 0.25 kg. For drones weighing less than 25.0 kg, Part 107 requires non-recreational drone operators to obtain a remote pilot certificate, and drone operations are limited to a visual line of sight for the operator, and only during the daytime below certain altitude and airspeed restrictions.

Prior to the pandemic, newly proposed FAA rules from Dec. 31, 2019, will require remote ID of drones weighing more than 0.25 kg, which will assist law enforcement in regulating drone operations, and facilitate future expansion of U.S. drone operations beyond current daytime visual line of sight restrictions. However, critics of the proposed remote ID rule argue that privacy concerns regarding the identity of drone operators, and increased technology costs for new and existing drones to comply with the rule will burden the emerging drone industry.

While drones may increase efficiency, reduce human exposure, and meet a rising consumer demand, there remain concerns around safety, privacy, and security. Drones, like other emerging technologies, will handle large amounts of data (including customer names and addresses) and could be prone to malicious attack.

Many of the legal issues associated with robotics and artificial intelligence are therefore relevant here, including product liability and other liability, cyber security risk/cyber legislation and more. When commercial flights return to pre-coronavirus levels, regulators must also consider how the airspace can be effectively controlled and monitored to implement drone utility into the air traffic.

What seems clear, however, is that off the back of increased usage of autonomous drones and robots during the pandemic, there will be quicker exponential growth in deployment of drones. As such, while businesses must apply the applicable laws mentioned above, expect more drone-specific laws in this area across countries to help enable this and to put some guardrails around the technology as it takes flight.

Please note that the information provided above is for general information purposes only and should not be relied upon as a detailed legal source.