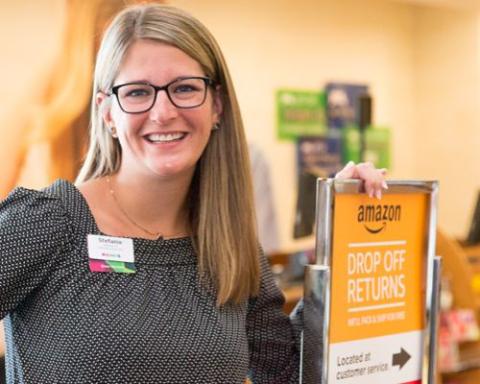 Kohl's completed its nationwide rollout of its Amazon returns program on July 8 and the retailer is beginning to see some early results.

The programramped up over the course of July, CEO Michelle Gass explained in Kohl's recent earnings call. Comparable store sales declined 2.9% in its second quarter 2019, negatively impacted by weather, but then progressively improved. The quarter ended August 3.

“As we talk about the last six weeks being positive about a plus 1%, that trend started actually before we started ramping up in Amazon. But that being said, we’re encouraged on how it’s actually adding to the improved performance of the business.”

The Amazon returns program, which rolled out to 82 Kohl’s stores last October, is now available in all of Kohl’s 1,150 stores, minus Anchorage, AK.  Shoppers can return Amazon orders in stores and Kohl’s will pack, label and ship the return for free.

The overarching goal of the program is to convert the Amazon traffic that comes into the stores into loyal Kohl's shoppers over time. Kohl’s is giving customers a coupon to stay and shop the store when the return is completed, according to store manager Stefanie Escobedo.

Gass called the program a “great example of our innovative spirit” and said Kohl’s expects its upcoming brand launches, program expansions, and increased traffic from the Amazon returns program to incrementally contribute to its performance during the balance of the year and beyond.

“While it’s only been in place for six weeks, we’re highly encouraged with the initial results,” she said of the Amazon program. “Traffic coming into our stores is meeting our expectations and skewing towards off peak times.”

Kohl’s began supporting the program in mid-July with a robust marketing plan, including print, digital, and national broadcast TV, and has seen a mixture of existing customers and new younger customers using the service. So far the retailer is seeing conversion consistent with the pilot stores.

“While it’s early, we’re pleased with the initial results and remain confident in our ability to drive the intended benefit of this program over the long-term,” Gass said. “It’s important to note that we expect the Amazon returns program to have a positive contribution to operating income in 2019.”

While Gass called the program a “profitable venture for the company,” increased payroll in stores to manage the returns and reverse logistics costs were incurred in the second quarter, as well as additional one-time expenses for training the store associates.

But, according to location data advertising firm inMarket, foot traffic to Kohl's stores increased nearly 24% when comparing average total visits three weeks before the program launched versus three weeks after it began. However, trips of just five minutes or less increased by 17% after Kohl’s began accepting Amazon returns.

“This is likely because shoppers wouldn’t have had enough time to shop around and make a purchase in this time frame, but would have had time for a quick in-and-out visit to drop off packages,” the inMarket InSights report noted.