FedEx said it will end its contract with Amazon for small-package ground deliveries when the contract expires at the end of August.

The move comes two months after FedEx decided not to renew its contract with Amazon for U.S. cargo delivery through its plane-based express service and as Amazon focuses on building out its own delivery network.

"This change is consistent with our strategy to focus on the broader e-commerce market," FedEx told Business Insider, "which the recent announcement related to our FedEx ground network have us positioned extremely well to do."

Amazon said in a statement said it is “constantly innovating to improve the carrier experience and sometimes that means reevaluating our carrier relationships.”

FedEx will have a contract with Amazon for international deliveries still, but as Amazon builds out its own delivery, cutting ties with the online behemoth will reduce FedEx’s dependency on it. Amazon made up about 1.3% of FedEx’s sales last year, according to Bloomberg.

The news isn't great timing for Amazon, which announced earlier this year it’s in the process of overhauling its core U.S. Amazon Prime delivery service to offer free one-day shipping instead two-day delivery for its members. The move will cost the company approximately $800 million and Amazon will be building “most of this capacity through the year in 2019.” In addition, the e-commerce retailer is entering the busy holiday season.

“Losing Amazon could seem like a big drop for FedEx, but it actually opens the door to partner with other retail giants, including its existing deals with Walmart and Walgreens,” writes Blake Morgan, senior contributor, Forbes.

Take Walmart for example, which announced this year, as its shipping war against Amazon rages on, that it expects to roll out fee-free one-day delivery over the coming months with a plan to reach approximately 75% of the U.S. population this year. 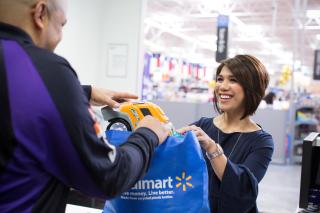 “This strategic initiative between FedEx Office and Walmart builds on a shared goal of providing customers convenience and value, so they can save both time and money,” said Brian Philips, CEO of FedEx Office, at the time. “The growth of our store network to 500 new locations brings our brand even closer to busy consumers who have told us they are seeking secure, reliable options for packing, shipping and receiving packages.”

In addition to this partnership between the two companies, FedEx unveiled its SameDay Bot this year, and declared it’s collaborating with Walmart, as well as AutoZone, Lowe’s, Pizza Hut, Target, and Walgreens, to help assess retailers’ autonomous delivery needs.

The SameDay Bot delivery device was designed to help retailers make same-day and last-mile deliveries to customers. With the bot, retailers will be able to accept orders from nearby customers and deliver them by bot directly to customers’ homes or businesses the same day. On average, more than 60% of merchants’ customers live within three miles of a store location, demonstrating the opportunity for this on-demand, hyper-local delivery.

In one more development of Fedex and Walmart's partnership, FedEx Office locations also now offer free pick-up for all Walmart deliveries. FedEx Office will hold Walmart customers' orders for seven days from the date it’s ready for pickup and the pickup itself is free.

At the end of the day, while Amazon is important, FedEx has many additional e-commerce growth opportunities, whether those include beefing up its partnership with Walmart or just focusing “on the broader e-commerce market.”