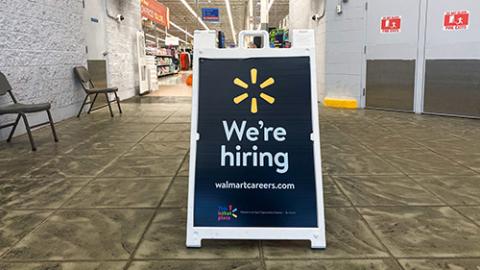 Walmart has been very intentional about its job descriptions.

If you haven’t evolved your annual employee review process in the last two years, it’s probably time to start.

As today’s retailers invest in their digital capabilities to meet the needs of the new consumer and gain a competitive edge, they’ve found themselves locked in a battle for the tech talent required to achieve these goals. Not only are they navigating the Great Resignation that’s afforded employees with more leverage than in recent years, but they’re also competing with the likes of Google and Facebook in recruiting and retaining top talent.

As a result, many retailers are rethinking their end-to-end people strategies, including dramatically increasing communication, upskilling their current ranks, and implementing new transformation tactics required to get everyone eager and excited to move in the same direction.

For Walmart, this starts with the job description. “It’s really important on the details to be crystal clear with the people taking jobs what they are actually doing,” said Anthony Soohoo, EVP of the home division at Walmart U.S., at Shoptalk this week. “Sometimes, some companies have a tendency to maybe use a sexy name on the title, and we found the better thing to do is actually be very clear about what the role is.”

For example, the company has been very intentional about removing the word buyer from a job and instead using merchant. “In an omnichannel world, merchant doesn't mean buyer anymore,” he noted. “It starts with understanding clearly what the needs are, assessing what you have, and then figuring out where the best is in terms of bringing the talent in and training them up.”

Learn More About Managing Like a Coach, Not a King

Walmart, which recently announced its global tech corporate team will grow by 25% after a hiring spree, has also been much more public about the initiatives they’re developing, both in-house and with their partners. “People join companies because of the projects they work on and the problems they get to solve,” he said. “I think Walmart traditionally has not made as much communication or shared what we're doing. But, obviously, in today's time, we've been much more open” about them.

Albertsons Companies is not only taking pains to ensure its company culture is evolving to become a better and more inclusive working environment, but they’re also prioritizing individual growth, said Chris Rupp, EVP and chief customer and digital officer. This includes both formal and in-the-field training to provide employees with more responsibilities and experiences.

“We're becoming more intentional about helping people chart where they want to go next by figuring out what experiences and exposures will help them grow and develop,” she said.

Soohoo noted that he’s spending a lot more time on skip-level meetings to better understand associates’ needs, especially the remote-only ones who joined the company during the pandemic. “Many of our associates if they’ve only worked on Zoom, my take is they know how to do a task, but they may not know how to actually do a job.”

Helping associates understand that change is constant is also crucial in getting them to stick around and succeed, as is getting them to embrace the notion that their career paths can’t be the linear path they’ve traditionally seen, he said.

These feedback loops are critical in today’s work environment, agreed Rupp, including facilitating them at scale in order to communicate with a large number of people quickly: “You have to make sure you’re not leaving people behind in the change you’re trying to drive.”