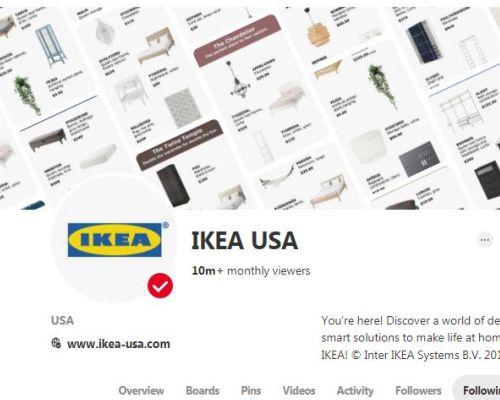 Ikea, known for its thick print catalogs of furniture and home inspiration, is putting its product catalogue on Pinterest and making it shopable.

In March, Pinterest launched Catalogs updates allowing retailers to upload their full catalog to Pinterest and turn their products into dynamic Product Pins, which means more shoppable Pins across Pinterest. A new dashboard allows businesses to organize their feed so their products can be discovered and purchased by Pinners.

According to Digiday, Ikea wanted to reach Pinterest’s prime audience of “DIYers and how-to-ers and customizers.”

“But promotions in the past felt a little stale. We were running out of ways to show the catalogue to people online, so we sought out something different.”

Thus Ikea created a product questionnaire built into Pinterest to learn what users were shopping for and interested in. Pinterest users could either let Ikea fill an automated Pinterest board based on their responses, or browse through recommended products and build their own boards. Pins in the program were linked to product and catalog pages on the Ikea site.

After launching last August, Longarzo said that 25,000 Pinterest boards have been created using the tool, and the questionnaire had a 100% completion rate.

To make the most of its platform partnerships, Longarzo said the Ikea team regularly partakes in workshops with its account reps at social platforms, including Facebook as well as Pinterest. Through these discussions, Ikea has fleshed out its paid and organic strategies on Pinterest, including testing video ads and building the shoppable catalog, which isn’t a paid product.

Pinterest said its updates like those it made to catalogs help retailers get in front of customers who are looking for related products, and Pinners to see items that match their unique style and taste.