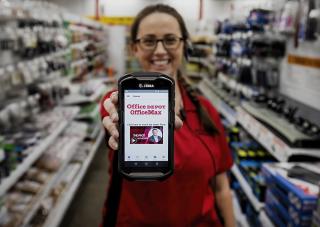 It’s hardly surprising to learn that an office-supply retailer takes its IT seriously. After all, many of the solutions on its shelves are intended to streamline its own customers’ digital operations.

Office Depot knew it could do better in its quest for process simplification within its stores and warehouses. For the last several years, the retailer’s in-store mobile computers were actually iPods fitted with Verifone sleds with scanning capabilities. This Frankensteining of technology often posed a challenge because the two pieces of hardware didn’t always communicate reliably.

And while the Apple iOS offered the ability to develop customized apps, the iPods lacked a unified enterprise-wide form factor that could be used in both the stores and its supply chain operations, Jonas Stillman, Office Depot director, retail systems and omnichannel initiatives, tells RIS. The consumer-grade devices simply weren’t designed to be durable enough to withstand a retail’s high velocity environment.

When it came time to upgrade, the company knew it needed sturdy hardware and an application base that was easier to operate, as well as a reliable device providing agile app development.

Somewhat fortuitously, Office Depot’s supply chain operations were also due to upgrade their hardware. This team, familiar with Zebra Technology devices because of its use with legacy Zebra Motorola Windows CE devices, had begun implementing a few Zebra TC51 mobile touch computers in their warehouses.

The retail side was able to leverage a lot of their learnings, Stillman says, and tested the mobile computers in its stores.

To say that Office Depot has been pleased with the results is a bit of an understatement: It’s developed so much faith in the Zebra devices that it’s automated every process in the building to run on the 7,500 units integrated into its stores.

“It’s enabled process automation and reduced waste, so we can spend more time with our customers,” Stillman explains. 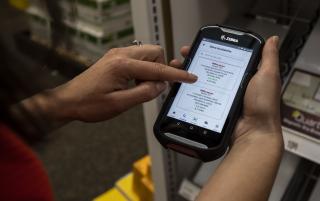 The retailer is now able to develop applications on the fly and have them deployed out to stores within days, he noted, rather than the previous several months that it took to develop and deploy in the field.

The company even ordered the TC51 with exoskeleton protectors, transforming them into what’s essentially a “smartphone on steroids,” Stillman says. While Zebra rates the devices to about a 20-foot drop protection, Stillman painted this as a conservative estimate: “I can tell you we have stress-tested the devices to their max, and they can go a lot further distance without breaking.”

After nearly a year in the stores, the device failure rate from a breakage standpoint is historically low for Office Depot, he says.

In addition to their durability, the Zebra devices were particularly appealing to Office Depot because of their built-in telephony capabilities.

“We are actually working on a pilot right now in several stores where we're going to retire our legacy telephones and use the Zebra device as well for phones,” Stillman notes. “We've had that in about a dozen stores for several months now with great results, and we believe we should be able to start a fuller-scale deployment in the very near future.”

When devices do fail, the Zebra Rapid Exchange Program sends a new device immediately, a program that Stillman describes as a game-changer.

“In the rare case that a device does go down, we're only down for at the most for 48 hours, which is really shipping time,” he says, noting devices typically only fail because of store abuse.

Though he declined to specify a dollar amount, Stillman says Office Depot has seen considerable savings to its maintenance and support costs.

Office Depot has now eliminated all analog manual process and ported them over to the Zebra devices. For example, associates previously spent each morning performing the legacy “retail outs” process of determining what was out of stock by comparing a printout with a manual store search. Now they can use an Office Depot-developed app, known as Planogram Excellence, that does the heavy lifting for them. 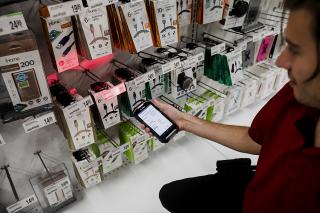 The list of missing items is automated based off the sell-through data and planogram shelf capacity. When associates boot up their TC51 in the morning, the details are at hand and they just need to fill the missing shelves.

The company has also similarly automated its buyback program, eliminating the manual creation of the paperwork required for the return process. While previously a step that necessitated logging into multiple systems and even different computers, it can now be accomplished directly from the TC51.

Finally, Office Depot has developed a mini warehouse management system for its stores, known as Scan Put Away, that provides the company with greater clarity into which products are in an overstock or backstock location within the store.

Each product has a chain of custody on it at all times, Stillman says, so systems are automatically updated when shelves are in need of replenishment. While once a manual scan, it’s become an automated process based off of sales, what’s on hand, and how much the system knows can fit on the shelf.

“The less time we’re having to stock trade, fill the shelves, do price changes and all the legacy tasks that retailers have been doing for 50 years,” he notes, “the better off our clients will be, and the more successful our clients will be in their own business.”