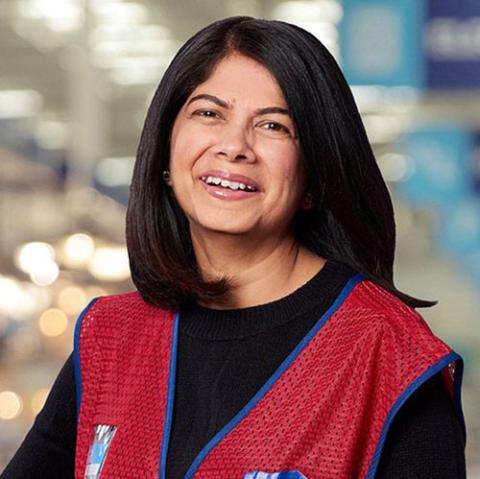 As nearly any retail tech executive knows, getting buy-in from all stakeholders is crucial for a deployment’s success — and this includes both top-down and bottom-up support.

Lowe’s CIO Seemantini Godbole is no different, and it’s this commitment from the hundreds of thousands of employee boots on the ground that’s proven to be instrumental in the company’s successful navigation through the pandemic. Not only has Lowe’s tech investments served it well during today’s topsy-turvy consumer demand shifts, but they’ve also elevated it to what could be the best possible perch as retail confronts yet another round of disruption.

In a recent wide-ranging interview with RIS News that covered her experiences of leading during the pandemic, Godbole shared what it’s been like to not only command the company’s tech advancements during the pandemic — including replatforming its website and upgrading its store operations — but also how the company is engaging consumers and navigating today’s supply chain challenges through the use of in-house technology.

As part of this, Godbole repeatedly points to Lowe’s associates as the driving force behind its success.

“I give them a lot of credit because we have been deploying a lot of technology at a pace that is amazing,” she says. “However, as much as it is a push, it’s also a pull,” with associates eager to keep pace and provide valuable feedback along the way.

While even your most well-seasoned retail executive couldn’t have been prepared for COVID-19, Godbole was certainly no stranger to digital transformation. In addition to holding tech leadership roles at Sabre and Travelocity, she spent nearly nine years at Target, where she led transformation as senior VP of technology.

What book is on your nightstand or to-do list?
Godbole has sought out history, mystery and science books during the pandemic — all combing to serve her need for both knowledge and comfort. A few specifics include “Freedom at Midnight” by Larry Collins and Dominique Lapierre; “The Gene: An Intimate History” by Siddhartha Mukherjee; and the Rex Stout mystery series.

What has been your pandemic-prompted hobby?
Reading, cooking and a little piano: “I’ll be a beginner forever.”

Where are you looking forward to traveling?
Godbole had just returned from Iceland, which she described as “spectacular.”

What is your most used mobile app?
Lowe's (of course) and Sudoku.

She joined Lowe’s in November 2018, enticed by both the size and complexity of its business, as well as the thought of serving a customer base who often made significant purchases requiring thoughtful decisions.

Godbole was also drawn by Lowe’s CEO Marvin Ellison’s view on the importance tech plays at retail — she recites a quote from their first meeting: “‘All great retailers have a few things in common, and one of top things in common is they have great technology.’” — as well as the company’s evident desire for change.

“I saw this real hunger for transformation and customer experience, which really was my sweet spot,” she says, and this trifecta combined for a once-in-a-lifetime opportunity.

It’s a recipe that’s proven to be Lowe’s secret sauce, as the essential retailer not only navigated an e-commerce explosion but also increased store sales. Like other retailers, Lowe’s seized the pandemic’s digital acceleration to institute long-held tech initiatives, but the company has also swiftly upgraded its store experiences — often marrying the two in the process.

Godbole had been in the CIO role for just over a year when the first murmurs of COVID-19 began bubbling up, and she says the pandemic quickly hit home into her associates’ and customers’ lives. As shoppers hunkered down and had plenty of time for home-improvement projects, it didn’t take long for Lowe’s to realize they sought experiences that made them feel safe.

So while Lowe’s did experience a massive influx of e-commerce sales — not to mention adoption of contactless fulfillment options like curbside checkout and pickup lockers — their foot traffic also flowed freely thanks to their wide, spacious stores — a setting that proved to be one people felt more safe to shop in.

At the same time, Godbole says concern for their 300,000-plus associates’ wellbeing was firmly top of mind, understanding the childcare issues suddenly thrust upon them, the ill family members they had to care for, and even those associates who became ill themselves. While many employees were still in stores every day, others, such as those in the contact center, were navigating the new, often-boundaryless remote work environments. 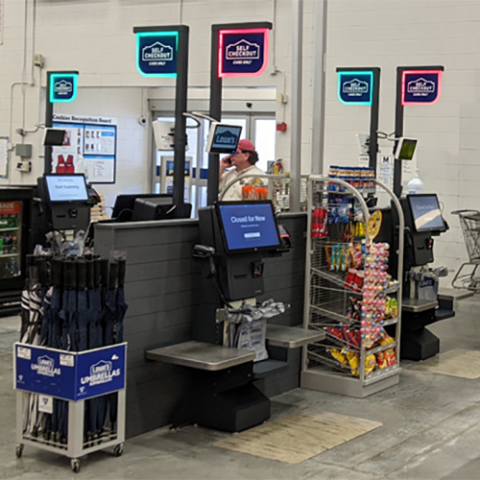 Helping associates stay both focused and motivated was a significant step for Lowe’s leadership, says Godbole, and they worked to adjust not just store operations but also corporate culture. Godbole recalls that pre-pandemic, Lowe’s very much emphasized an “in-the-room” culture. Trying to replicate this in an online setting was a challenge, she concedes, but a companywide desire to serve customers carried them through the heavy work.

Indeed, the new retail environment proved to a moment when Lowe’s quickly realized that receding wasn’t an option, and as evidence of this momentum, the company replatformed the decade-old Lowes.com during the first half of 2020. It’s a task Godbole and team actually completed ahead of schedule, and the accelerated execution is emblematic of the urgency and scrappiness their associates demonstrated, she says.

While the company initially floated the idea of slowing down the replatforming, she says it quickly became clear that wasn’t the right choice, despite not being afforded the luxury of time a pre-pandemic implementation would have provided.

Whereas they previously intended to incrementally increase the number of visitors to the new site — moving from 1% to 5% to 10%, etc., and pausing to analyze data, all during the retailer’s “slow” period between the holidays — they instead doubled down and went from 10% to 25% to 100% in just a matter of weeks.

This all, of course, occurred when the company was experiencing record website traffic, and Lowe’s rapidly scaled the technology, releasing new content every day.

“If you had asked me before 2020 if I would ever do that, I would have said that’s a crazy plan and we would never do anything like that,” Godbole says. “But we did it, and it worked beautifully. We had no critical incidents to speak of — and I think that speak volumes.” 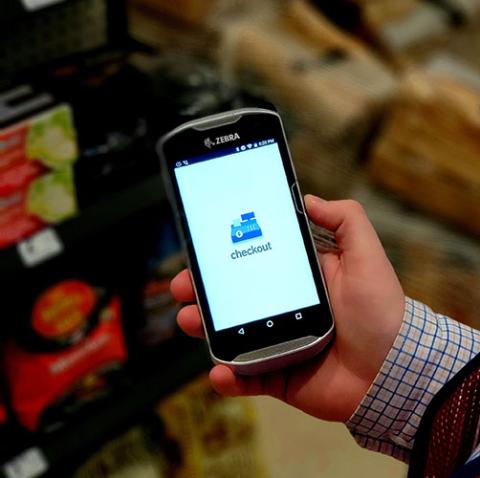 Lowe's has more than 110,000 mobile devices deployed across its stores.

Lowe’s has been an early adopter of mobile devices in its stores, deploying them across its stores more than a decade ago. It currently has more 110,000 mobile devices across its fleet, enabling employees to determine everything from price changes to inventory levels to best-selling products. In addition to doubling as mobile checkout devices, they also deliver associate training courses that are organized in five- and 10-minute chunks.

The response to the technology has been overwhelmingly positive, both by its customers and associates, Godbole says, describing their adoption rates as “amazing.” All of Lowe’s store technology, whether it’s mobile devices or pickup lockers, is designed so that associates are spending less time on tasking and more on customer service.

Much of Lowe’s tech is built in-house, including the self-checkout terminals in approximately 580 of its 1,700-plus U.S. stores; developing them in-house enabled Lowe’s to customize features and integrate its loyalty programs beyond what they found vendors could provide.

Taking a page from the Apple playbook, Lowe’s designs its store technology to be operated sans instructional manual —and up and running just a day after installation.

“We never print instructions. We never bring the user manual. We have no training on how to use this, because the whole point is for it to be simple and intuitive to use,” Godbole says. Just as no one shows consumers how to use smartphone apps, Lowe’s operates under the expectation that their store technology should be usable out of the box. 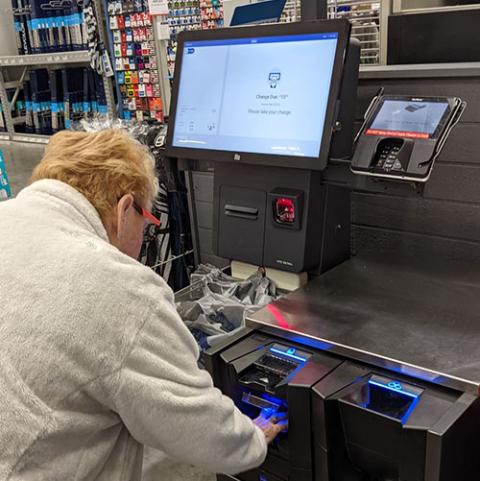 Lowe's designs its checkout terminals so that the associate terminals are as easy to use as the customer terminals.

Similarly, its customer self-checkout terminals are nearly identical to associates’ terminals: “If it works really well for associates, it should work really well for customers and vice versa.” This mentality has enabled the retailer to slash associate training time down to near nothing while customers can check out in an average of 65 seconds.

The self-checkouts are also designed to mimic some e-commerce functionalities consumers have become accustomed to, including seeing their items tally up. Doing so is part of the company’s strategy to develop and present comprehensive omnichannel experiences.

Lowe’s is also realizing increasing benefits from the use of its freight flow app — part of a suite of protocols for its inventory management systems — which has enabled the company to optimize its workforce by making the receiving process as quick and seamless as possible. Knowing both the volume and type of items it’s receiving has helped optimize their workforce by better understanding how many associates are needed for every truck that comes in.

The technology is also unlocking other improvements along the way: Lowe’s has cut its advanced ship notice (ASN) from 40 minutes down to just 40 seconds. (“That’s not a typo.”)

By scanning the shipment label, associates receive access to everything from the quantity of the shipment to the item details, all the while communicating with Lowe’s internal systems to provide inventory updates.

This process previously required multiple scans and reconciling within various systems, forcing associates to repeatedly return to their terminals for updates. During this period of retail industry labor challenges, lessening their associates’ workloads couldn’t have come at a more opportune moment.

“In the supply chains for all retailers, [we’re like other retailers] that we just want to bring relief to our associates in terms of lessening their workload,” Godbole notes.