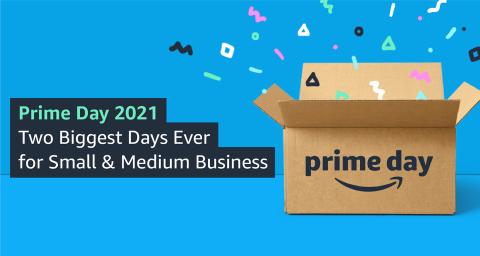 Online retail sales in the U.S. may have broken new records during Amazon’s Prime Day, while Amazon said the shopping holiday was the biggest two-day period ever for its third party sellers.

Online retail sales over the 48 hours of June 21-22 surpassed the record levels of e-commerce spending reached during Cyber Monday last year, according to an index tracked by Adobe Analytics, CNBC reported. Total e-commerce sales on Monday and Tuesday surpassed $11 billion, representing 6.1% growth compared with last year’s October Prime Day event, according to the index, which looks at more than 1 trillion visits to U.S. retail sites and over 100 million items across 18 product categories.

Bazaarvoice surveyed its Influenster Community post-Prime Day and learned that a quarter of respondents noted they shopped at Amazon and other brands and retailers, while 75% solely shopped at Amazon. “Once again, this year has proven that Prime Day is lucrative not just for Amazon, but potentially for any brand and retailer who sells their products online, and especially for those who actively hold sales during the two-day retail event," Keith Nealon, CEO of Bazaarvoice tells RIS.

Amazon said Prime Day 2021 was the biggest two-day period for its third party sellers, nearly all of which are small and medium-sized businesses, and that Prime members in 20 countries shopped more this Prime Day than any previous Prime Day, purchasing more than 250 million items worldwide. This year an Amazon-funded “spend $10, get $10” promotion led to customers spending over $1.9 billion on more than 70 million small business products during the promotional period, more than a 100% year-over-year increase on sales compared to the Prime Day October 2020 promotion.

While the shopping holiday boosted sales across the internet, Amazon is on track to make more than $386 billion ﻿in U.S. e-commerce sales in 2021, according eMarketer’s latest estimates. “That’s about $320 billion more than its biggest e-commerce rival in the country, Walmart,” it said.  “In fact, if you combine the U.S. e-commerce sales of the next nine top e-commerce retailers, the total will still be less than Amazon’s this year.”

“Prime Day is the culmination of growing customer expectations for affordability, convenience and speed,” Ian Gardner, CEO at GoFor Industries, tells RIS. “Delivery in a matter of hours is becoming the consumer standard, as seen with Target and Walmart offering competing sales events. But the true winner will be the retailer that is not only the quickest and most efficient to deliver, but that focuses on sustainability at every level of fulfillment. Customer expectations for green delivery are growing. We’ve seen Amazon investing in Rivian electric vehicles in response, FedEx partnering with Chanje Energy, UPS partnering with Arrival, DHL building their own captive Streetscooter fleet and GoFor partnering with a soon to be announced commercial EV OEM.”

While competing on sustainability will likely be a big strategy for retailers going froward, personalization remains a tactic as well.

“Amazon Prime Day, Target Deal Days and other major shopping events should prompt brands to rethink their approach to attracting and retaining customers,” Heidi Bullock, CMO at Tealium, tells RIS. “As customers are presented with new choices, like the decision to return to in-store shopping, stay online or a hybrid of both, brands have a chance to regain the customer loyalty they may have lost during the pandemic. Customers not only crave new experiences, but they also want to make sure they’re receiving value from the brands they choose to shop with. That’s why brands that can leverage data to provide personalized customer experiences win out on Prime Day and beyond.”