Whether you strive to win a sport championship, a music competition, or a spelling bee, winning requires you to do the same thing: You must out-perform your rivals. Moving up in the annual list of the Top 100 Retailers by revenue share is no different. Yet finding ways to out-maneuver competitors in the retail world requires more than just great products, it requires innovation.

What’s the secret to growing revenue in 2022 and beyond? The rules of competition keep changing in retail. If you’re not a rule-maker, that means you’re a rule-taker. The best way to change the retail game is to change the rules in your favor. Rule-makers innovate faster, better, and in different ways to out-smart and out-execute their rivals. By innovating beyond just products, rule-makers redefine the customer experience by discovering unmet customer needs and fulfilling them before others even see them.

To dig into how retailers achieve revenue growth through rule-making, we re-ranked the RIS Top 100 Retailers by their ability to meet customer expectations. To measure expectations, we use online interviews with customers to score how well each company performs against their functional and emotional needs. These needs are grouped together to form moats, which is what companies build to protect rivals from taking their customers away. Warren Buffett says he won’t invest in a company that doesn’t have an economic moat. And the precursor to an economic moat is a customer moat.

Here are the top ten retailers ranked by their Moat Score (ability to meet customer expectations). 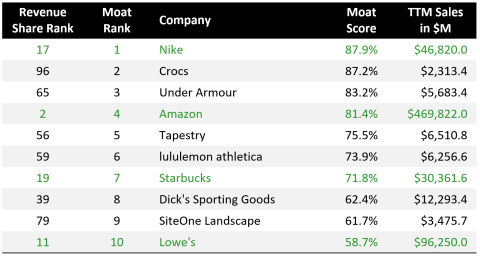 Four of the top ten retailers also rank high by revenue share (retailers in green). That shouldn’t surprise any of us, since any company that meets customer expectations better than its rivals logically generates more revenue. In fact, the top 20 companies best meeting customer expectations (high moat score) on average increased their revenue share ranking by ~2.5 slots. In comparison, that’s five times greater than any other quintile in the top 100. Top-line growth comes from figuring out how to create a new set of rules that force your rivals to follow. 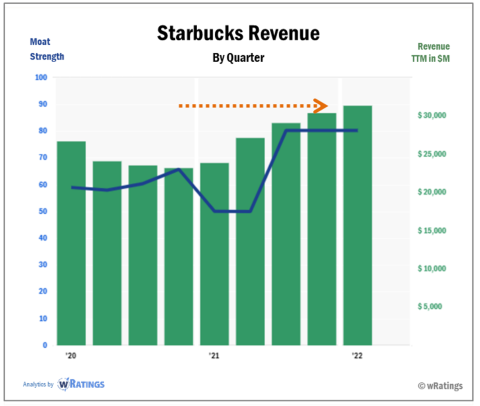 Consider Starbucks (NASDAQ: SBUX), a company that created the premium coffee category back in the 1990s. Let’s face it, the executive team at Maxwell House had the perfect name to be the third place between work and home yet no one stops at a “Maxwell House” to grab a cup of coffee. As of November 2021, Starbucks 33,833 stores in 80 countries, of which 15,444 were in the USA. That’s quite a feat to accomplish.

Yet, even Starbucks was not immune to the pandemic in 2020. Trailing-Twelve Month (TTM) Revenue shrunk every quarter sequentially throughout 2020 as stores were forced to close their doors or limit their access.

So what is a company whose brand is synonymous with the “third place” supposed to do? Market dominators don’t sit back and wait. They take action. They create new rules that force others to compete on the terms they define. Consumers no longer wanted to (or could) spend hours sitting in their stores to sip their lattes. They wanted them to go. Starbucks not only adapted, they created a new set of rules.

In our Moat Profile here, executives at Starbucks went to work on improving performance in several key moats (see orange arrows). The first two (Distinct Innovation and Routine Reliance) were to innovate their business model to better serve the to-go consumer through technology, incentives, and re-training. In turn, consumers would still rely on Starbucks for their daily caffeine fix. Routine Reliance is a powerful moat with customers, since they build the company right into their schedules to create a lasting bond.

Innovation often requires new skill sets, and mastering the to-go coffee during a pandemic comes with its challenges. Starbucks built and upgraded those core competencies, although its culture has recently been tested with requests for unionization (but that’s a new challenge with its own unique data for returning CEO Howard Schultz to tackle).

What’s most impressive about Starbucks accomplishments in 2021 was their ability to set and make new emotional ideals for customers in both Assurance and Curiosity levels. In the new to-go model, consumers needed extra creativity without sacrificing their stability. These new rules, while different from the Starbucks experience pre-pandemic, were embraced by a loyal customer base. Customer expectations shifted higher right along with Starbucks performance for both emotions, a clear sign that Starbucks is a rule-maker. 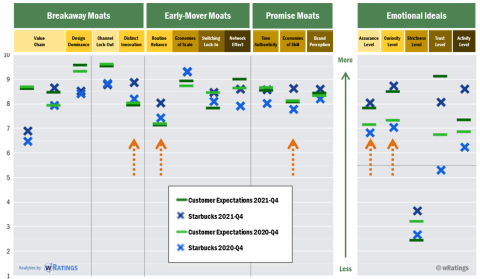 In addition to returning to revenue growth throughout 2021, Starbucks improved their ranking four spots in the Top 100 Retailers Revenue Share from #23 in 2021 to #19 in 2022. No small feat during a pandemic.

Gary A. Williams is the founder and CEO of wRatings and a co-managing partner at G2 Equity Partners.