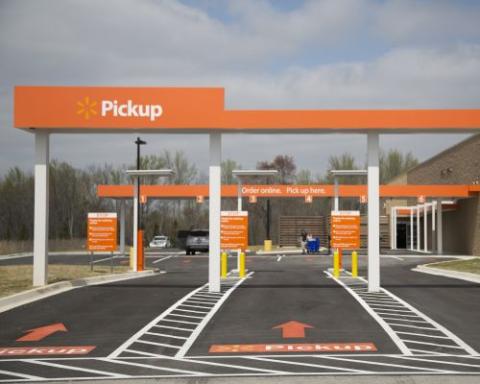 Walmart plans to have 3,100 locations offering grocery pickup by the end of 2019.

Grocers have been accelerating their investments in technology, shopper insights and omnichannel selling over the last year, resulting in the industry creating some of the freshest consumer experiences available today. Retailers such as Walmart and Kroger have poured resources into things like online shopping services, home delivery, autonomous vehicles, and artificial intelligence.

To uncover which grocers are thriving in this new landscape, RIS’ sister publication Progressive Grocer has published its annual Top 50 Grocers report. The report ranked leading grocers across four critical categories that explored financial metrics, store count, employee count, and the power of their banners.

The entire ranking as well as an in-depth look at the report’s methodology is available here. Below is a quick look at the five grocers that claimed the top positions and the full top ten list.

The top six retailers didn’t budge from their 2018 rankings on Progressive Grocer’s Super 50 list. Interestingly, Meijer, jumped up five slots to No. 7 from last year’s No. 12. And perhaps most notably is the swapping of places of Amazon/Whole Foods Market (down two spots to No. 10) and Aldi U.S. (holding steady at No. 9) from last year, showing the solidifying influence of limited-assortment hard discounters, with their largely private-brand offering.

Progressive Grocer reports that the world’s biggest retailer is also its biggest grocer by leaps and bounds, raking in nearly $514 billion annually. Not only is the retail megalith selling groceries at 4,253 physical locations, it is also testing out next-gen retail tech constantly, from revamping its website and testing robotics to pick groceries, to even experimenting with artificial intelligence in the store. In the last year, the retailer added about 1,000 grocery pickup locations, and reached nearly 800 grocery delivery locations. It also launched Spark Delivery test, a new last-mile grocery delivery service, and showcased new in-store innovations, including autonomous shelf-scanning robots and floor cleaners and FAST unloaders.

Over the past year, Albertsons has been investing in tech for its Safeway, Albertsons, and Vons grocery banners. The grocer piloted an automated e-commerce fulfillment solution for customers, launched The Marketplace, and is working on transforming the shopping experience. However, its expected merger with retail pharmacy chain Rite Aid was called off last August. The retailer also recently replaced CEO Jim Donald with Vivek Sankaran, who formerly served as CEO of PepsiCo Foods North America.

The international grocer held steady in fourth place, matching its 2018 finish in Progressive Grocer’s annual ranking, and boasts 1,963 supermarkets across its Food Lion, Stop & Shop and Hannaford banners. The high-tech grocer continues to invest in and develop cutting-edge technology, including its rollout this year of 500 robots in Stop & Shop and Giant/Martin’s stores, marking one of the largest deployments of robotics innovation in the U.S. grocery industry.

The employee-owned grocery chain with over 1,200 locations increased its revenue to more than $36 billion. It boasts the third most employees on this list (201,000) and was named one of Fortune’s 100 Best Companies to Work for the 22nd consecutive year, ranking No. 12, up from No. 47 last year. The company sports an Information Systems (IS) team of more than 1,000 technical professionals dedicated to maximizing the value of the company through the application of information technology.

The entire ranking is available here.