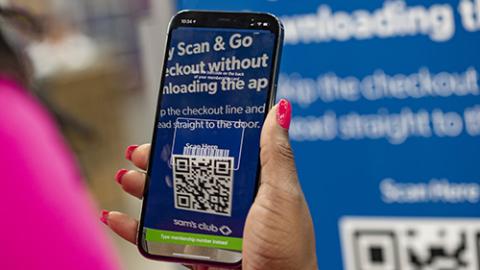 Sam’s Club is doubling down on efforts to digitally engage with its members, and it sees Scan & Go technology as a key component of that strategy.

Helping drive record sales has been the company’s success in attracting a subset of digitally savvy millennial members during the pandemic. These consumers are also strongly represented in what Kathryn McLay, president and CEO of Sam’s Club, termed their new Super Bowl cohort — the subset of consumers who became members thanks to the retailer’s wildly popular (and very first) Super Bowl ad.

Starring Kevin Hart, the ad sought to “concierge” consumers through Scan & Go, said McLay during a Shoptalk keynote in Las Vegas on Sunday, as it’s often mistaken for self-checkout technology. Scan & Go, which the exec described as one of the highest NPS products in retail, enables members to pay for items through a mobile app linking their membership information.

“We know our members who use it, renew with us,” she said, and the floodgates opened by the third day of airing the ad, with hundreds of thousands of members joining.

The technology also happens to be at the center of a legal dispute between Sam’s Club parent Walmart and BJ’s Wholesale Club, a point McLay declined to comment upon.

Engaging in a digital-first manner is requiring the retailer to think beyond straightforward journeys. Discovering member resistance toward downloading yet another app, Sam’s Club instead deployed a digital demo in which consumers can scan a QR code to trial a single instance of Scan & Go — later downloading the app if they wish to commit.

“It's just a different way of playing with the tech to make it more accessible to more members,” she said. What’s more, by blending physical and digital experiences, they’ve identified offers they can prompt members with for further engagement, including engagement in different categories.

“We’re beginning to play with some of those concepts, but all of that is based on having this open dialogue with a member online while they're in an offline club.”

McLay also shared insight into how Sam’s Club is leveraging learnings from its Scan & Ship technology, in which consumers scan bulky items with their phones for direct-to-home shipping. Though they initially assumed consumers would ship items immediately after scanning, they instead found consumers will let them sit in baskets for up to 30 days, later returning to purchase them after doing research.

There’s an opportunity to use this process for such things as Halloween costumes, said McLay, a category that’s historically difficult to keep stocked in every size.

Also on the horizon: Further advancement with robotic inventory analysis. Though Walmart has walked away from the technology in its stores, McLay said it works well in Sam’s Club in part because of their limited-SKU design with pallet flows and displays.

Available at nearly all 600 locations, the camera-affixed automated floor scrubbers scan inventory levels each day. Not only are the scrubbers “automating a role that’s asking to be automated,” she said, but they’re also providing an extraordinarily accurate inventory rate and freeing up associates’ time.

The robots are currently able to scan both tags on the floor and in the racks, and the company is exploring RFID technology so it can read the apparel tables as well.

With the future of U.S. cannabidiol growing, Sunnyside expands into more locations.