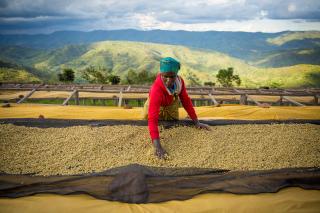 Starbucks announced that it will begin a pilot program with farmers in Colombia, Costa Rica and Rwanda to track coffee from “bean to cup," sharing real-time information along the journey of its coffee beans.

“Over the next two years, we will look to demonstrate how technology and innovative data platforms can give coffee farmers even more financial empowerment,” said CEO Kevin Johnson. “We’ll leverage an open-source approach to share what we learn with the rest of the world.”

Traceability technology could have profound implications for connecting coffee drinkers to the farmers who grow it, said Arthur Karuletwa, director of traceability at Starbucks.

“This could be a seismic change in an industry that hasn’t had much innovation in the way coffee moves across borders and oceans,” he said. “At the same time, I’ve met farmers who have very little by way of possessions, but they have a mobile phone. Digital has become the economic engine of this century, and traceability preserves the most valuable assets we have as human beings – our identity.”

In 2015, Starbucks announced it had reached the milestone of 99% ethically sourced coffee. Since its beginning, Starbucks has known the names of the farmers within its supply chain, including the more than 380,000 farms it worked with last year alone, Karuletwa said. The ability to incorporate technology into this process means the potential to connect directly with tens of thousands of sustainable coffee farmers, and the possibility of financial inclusion for these farmers, he said.

With its technology pilot program in Costa Rica, Rwanda and Colombia, Starbucks hopes to develop and demonstrate over the next two years how technology and innovative data platforms can give coffee farmers even more financial independence and confidence. Conservation International will measure the impact of traceability to understand the benefits farmers will receive from this technology. True to their open-source philosophy, Starbucks plans to share this system and what it learns openly.

"Many years ago, our controls and transactions were all done by paper, and today we are even talking about blockchain technology," said Ronald Peters, executive director of the Costa Rican Coffee Institute (ICAFE). "This shows us that, more than being at the front of every technological advancement, having the information and being flexible and adaptable are important.”

Apart from the transparency that traceability technology will provide at scale in relation to sustainability, Karuletwa also has a vision of using the technology to create an “authentic, seamless, dynamic” one-to-one connection between farmers across the globe and someone drinking coffee at, say, a Starbucks in Seattle or Shanghai.

Executive chairman Howard Schultz commented on blockchain and cryptocurrency in January on an earnings call, stating: "I believe that we are heading into a new age, in which blockchain technology is going to provide a significant level of a digital currency that is going to have a consumer application. And I believe that Starbucks is in a unique position to take advantage of that."

Schultz also said the company will "ensure the fact that we are at the cutting edge of this technology, of this consumer application."