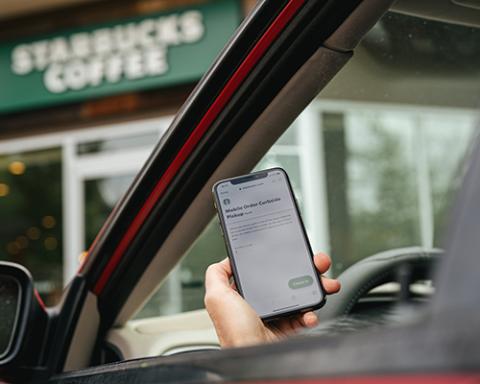 Starbucks is leaning hard on its tech investments as it adapts to shifting consumer behavior during the COVID-19 pandemic.

The company reported global revenue of $4.2 billion in the third quarter, down 38% from the prior year. Hit hard by widespread store closures and reduced consumer traffic, revenue declined 40% in the Americas to $2.8 billion, primarily attributable to a 40% decline in comp-store sales in the United States.

Despite these grim numbers, the chain is entering a period of recovery, with sales and profitability improving each month in the quarter. Chief financial officer Pat Grismer stated in an earnings call that the company believes “the worst is behind us.”

With 96% of its stores reopened at the end of the quarter, Starbucks is accelerating some tech investments in order to serve consumers who are shifting their hours and order sizes but proving they still need their caffeine fix. For example, transactions for the company’s Starbucks Delivers service tripled in the third quarter vs. Q2, with the highest volume in the late morning and mid-day.

“All of this indicates that customers are adapting their routines, and we are well-positioned to drive further recovery by simply increasing throughput and enhancing those safe, familiar and convenient experiences customers desire,” said president and CEO Kevin Johnson.

As a result of this, the company is accelerating its new store format and curbside pickup initiatives, as well as bolstering its loyalty program.

By leveraging new proprietary data-driven solutions that monitor in real time such factors as public health conditions, government guidelines, customer preferences and partner sentiment, Starbucks opened nearly 30% of its U.S. company-operated stores with limited seating experiences by the end of the quarter.

It’s now moving forward with plans to re-imagine and blend store formats to better meet the needs of today’s consumer. The process is a continuation of its efforts to add drive-through and mobile order pickup to traditional store formats in suburban markets.

In urban core markets where drive-throughs and curbside pickup aren’t feasible, Starbucks will build smaller footprint stores with walk-through experiences. Each one will ideally be located within a three- to five-minute walk from a traditional location.

The company, which is No. 17 on the RIS News Top 100 Retailers ranking, is accelerating the development of more than 50 of these stores over the next 12 to 18 months, and it plans to have several hundred in the U.S. over the next three to five years.

Starbucks is equipping associates with handheld point-of-sale devices so they can take orders while walking through a drive-through line.

It’s also introducing a new curbside pickup experience in 700 to 1,000 locations by the end of this quarter to enable incremental customer business. After testing contactless curbside pickup in 250 stores, it’s accelerating the initiative to bring it to nearly 1,000 “in short order,” said Roz Brewer, COO and group president, Americas.

Starbucks is adding a new pay-as-you-go option for Rewards members in the U.S. and Canada, enabling consumers to link their credit, debit card or PayPal account to earn rewards without having to pre-load a Starbucks card within the app.

Johnson noted that while nearly half of Starbucks’ sales stem from Rewards members preloading their store value cards, “we’ve heard from many more customers that they would like an option to earn rewards when paying directly with cash, credit, debit and select digital wallets.”

Rewards members who pay with a pre-loaded Starbucks card will ear two stars per $1, while those who pay with cash, credit or debit card, or mobile wallet will earn one star per $1 spent.