CVS Health said it plans to close another 22 stores in its first quarter of 2020. The move is part of plans to close approximately 75 retail pharmacy stores in total during 2020, the majority of which are nearing the end of their lease term, CVS CFO Eva Boratto said in the company’s recent earnings call. This comes after CVS closed 46 locations this year.

The "planned closure of 22 underperforming retail pharmacy stores" contributed to $96 million costs in a "store rationalization charge" the drugstore retailer revealed in a press release. CVS confirmed to RIS that the 22 closings are "part of the approximately 75 planned closures next year." Still, the upcoming closings account for a small chunk of CVS' footprint, which is more than 9,800 retail locations currently.

“We believe these decisions will generate enhanced longer-term performance,” Boratto said during the call. “Our real estate footprint remained very productive, and we will look for opportunities to further improve the performance in our portfolio.”

CVS has been in the midst of plans to add 1,500 HealthHubs by the end of 2021, its health-focused concept store revealed by the drugstore retailer in February. The retailer also said it’s on track with to have approximately 50 hub stores operational by the end of 2019.

“A key differentiator of our retail stores is our ability to meet members and consumers where they are to deliver local personalized care through our MinuteClinics and now our HealthHUBs making healthcare more accessible and affordable,” said president and CEO Larry Merlo. “And our approach is clearly resonating in the marketplace and is exemplified both by our continued share gains at retail and the early success of the HealthHUBs.”

Merlo said the HealthHUBs in Houston, which have been open for eight months, have continued to outperform their control group with higher script volume and Minuteclinic visits along with higher front store sales, traffic, and store margin.

Foot traffic analytics platform Placer.ai agrees the HealthHubs may be improving traffic. CVS had a “strong summer” with July and August visits that were 8.3% and 7.8% above 2018 data, Placer.ai said in a report sent to RIS.

“With a series of new innovative concepts like their Health Hub rollout, CVS may be on track for even greater things moving forward,” it said.

Merlo noted the “favorable performance and the incremental value we expect will be derived from the expanded utilization of the hubs gives us further confidence in our planned rapid rollout.” 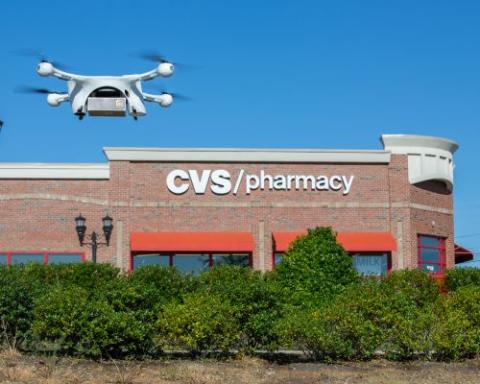 “We're encouraged by the increased engagement we have experienced across our digital programs,” Merlo also noted in the call.

CVS now has more than 82 million consumers engaging with the retail enterprise through text messaging, an increase of 7% from last quarter.

The company is also modernizing its enterprise functions and capabilities and is on track to see the initial benefits beginning in 2020. The company has aligned teams around simplifying its service operations by embedding intelligent automation to streamline routine processes and further advance CVS’ digital footprint.

“These initiatives are expected to further enhance our self-service capabilities by eliminating unnecessary member and patient mailings, as well as reduce incoming call volume across our businesses,” Merlo said.

Additionally, CVS and UPS just completed their first two “revenue-generating” drone deliveries of a medical prescription from a CVS pharmacy directly to a consumer’s home. The flights launched from a CVS store in Cary, NC, and the drones flew autonomously to the homes, but were monitored by a remote operator who could intervene if necessary. The drone hovered about 20 feet over the properties and slowly lowered the packages by a cable and a winch to the ground.

“We see big potential in drone delivery in rural communities where life-saving medications are needed and consumers at times cannot conveniently access one of our stores,” said Kevin Hourican, president of CVS Pharmacy.