Another Black Friday is almost upon us, kicking off the official holiday shopping season for retailers and consumers alike. But as consumers were predicted to start shopping earlier this year – almost half (47%) planned to start buying their gifts between September and mid-October – will the weekend look any different?

Retailers have already adjusted to early shoppers. Target announced its “biggest savings of the season” would start three weeks earlier than last year with “Weeklong Black Friday Deals” and the return of its “Deal of the Day” promotion on October 10. New this year, Walmart’s “Black Friday Deals for Days” events began every Monday in November on walmart.com. A related ad campaign promoted “Black Friday is on Mondays,” seemingly addressing the decline of Thanksgiving weekend shopping.

Last year, the weeks before Thanksgiving (Nov. 1 to Nov. 24) grew 19.2% YoY, while Cyber Week (five days between Thanksgiving and Cyber Monday) was down 1.4% YoY, according to Adobe Analytics.

“[The 2021] holiday shopping season was the first time where big promotional moments like Cyber Monday and Black Friday took on less of the spotlight,” Taylor Schreiner, senior director, Adobe Digital Insights, said in a statement earlier this year. “Like we saw during the COVID-19 pandemic, e-commerce has become a ubiquitous daily activity and a flexible way for shoppers to navigate product availability and higher prices.”

Yet, Deloitte predicts a change for 2022. The company’s 2022 Black Friday-Cyber Monday Survey, which examines what retailers can expect from shoppers between Thanksgiving and Cyber Monday, expects consumers to spend an average of $500 during this shopping period, up 12% from last year.

The study finds to take advantage of deals and promotions, eight in ten consumers will shop during Black Friday through Cyber Monday events (up from 71% in 2021) and will spend 50% of their holiday budgets. Younger generations are driving the charge with 86% of Gen Z and 89% of millennials planning to spend during this timeframe.

The ICSC Thanksgiving Weekend Intentions survey echoed a similar prediction, expecting 89% of consumers to shop in the period beginning Thanksgiving Day and ending on Cyber Monday, despite concerns around inflation and rising interest rates.

“While high inflation and rising rates may impact how consumers spend this holiday weekend, it’s clear that they do intend to spend on Black Friday and beyond,” said Tom McGee, president and CEO of ICSC. “The earlier start to the holiday season this year hasn’t dampened enthusiasm for traditional milestones like Black Friday and Cyber Monday, and we anticipate consumers will increase spending compared to last year across the holiday weekend.”

NRF also agreed, estimating 166.3 million people are planning to shop from Thanksgiving Day through Cyber Monday this year – a figure of almost 8 million more people than last year and the highest estimate since NRF began tracking this data in 2017.The annual survey by the National Retail Federation and Prosper Insights & Analytics finds more than two-thirds (69%) of holiday shoppers plan to shop during Thanksgiving weekend this year because the deals are too good to pass up (59%), because of tradition (27%), or because it is something to do (22%) over the holiday.

When it comes to inflation, ICSC’s survey finds 61% of shoppers agree that higher prices make Thanksgiving Weekend’s deals and discounts all the more influential on their purchasing decisions; taking advantage of deals and discounts were the top-cited reason (58%) for shopping during the weekend. 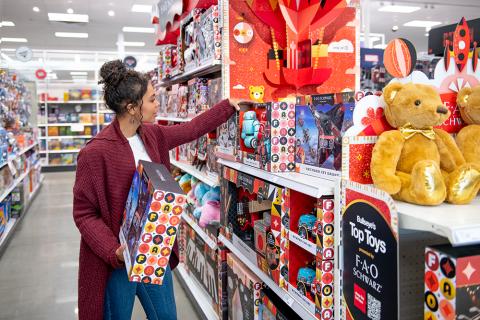 “With more than one million items on sale, we’re offering our guests incredible value on the season’s must-have items,” Target EVP and chief growth officer Christina Hennington said in a statement. Credit: Target.

It goes without saying, retailers will be challenged to capture shoppers’ attention amid a sea of promotions and sales.

“In the near term, our team is energized and laser-focused on bringing the best of Target to our guests throughout the holiday season, knowing it’s critically important for Target to be there for them during the busiest time of the year,” Target CEO Brian Cornell said on the company’s earnings call last week. “Our team is committed to offering value across our entire assortment through great everyday prices, unbeatable value on our owned brands, and accessible opening price points in every category. In addition, we’ll highlight our compelling and simple promotions, free services like Drive-Up and in-store pickup and new accessible payment options.”

Walmart CEO Doug McMillon touted the retailer’s mobile app experiences as a differentiator on its earnings call, noting customers can build a shopping cart, schedule a time to pick up an order or have it delivered, skip the line with Scan & Go tech, or find an item in their local store.

“As you would expect, we're helping families stretch their dollars as we head into the holidays,” McMillon said. “The Walmart U.S. team has set the retail prices for a typical Thanksgiving meal the same as last year. We're removing inflation on a basket of traditional Thanksgiving food items, including whole turkeys for under $1 per pound.”

Kohl's CFO Jill Timm said during its earnings call last week that the department store is moving back into some of its electronics – “smart home, TVs, things that we haven’t necessarily participated in, but we know are big Black Friday deal drivers for people to come to the store.” Timm also spoke of “much more personalized offers,” and that Kohl’s is eliminating a lot of “stackability,” in promotions, which were “confusing for the customer because they had to do math.”

“For the holidays, knowing how important value is to customers this year, we are amplifying our value messaging through our holiday brand campaign as well as by featuring our private brands more prominently in our marketing and leaning into our iconic Kohl’s Cash and Kohl’s Rewards programs across key promotional events,” Timm said.