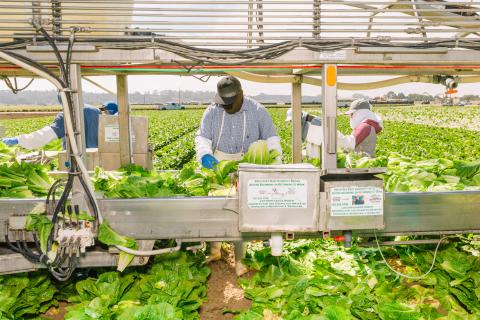 Walmart and Sam’s Club have asked suppliers of leafy greens to upload their data to the blockchain by September 2019.

Walmart and Sam’s Club have asked suppliers of leafy greens to upload their data to the blockchain by September 2019, in order to trace their products all the way back to the farm using blockchain technology.

Walmart has been working with IBM on a food safety blockchain solution and now the retailer says suppliers should have all these systems in place by this time next year.

Blockchain allows for digitized sharing of data in a secure way (for more info check out RIS’ feature “Unbreakable Trust: 5 Retailers Exploring Blockchain”). The information gathered by Walmart suppliers will be open and accessible through technology that offers real-time, end-to-end traceability from farm to table.

Over the past 18 months, Walmart has piloted new blockchain technology in collaboration with IBM and numerous suppliers. Walmart said in a letter to suppliers that, using the IBM Food Trust network that relies on blockchain technology, the retailer has shown it can reduce the amount of time it takes to track a food item from a Walmart store back to source in seconds, as compared to days or sometimes weeks.

Responding quickly to food safety issues is crucial, but the traditional paper-based method of capturing information that exists makes tracking down important data from multiple sources time-consuming.With paper-based ledgers, Frank Yiannas, VP of Food Safety at Walmart, said it may take his team seven days to track down where a product came from.

“The food system is absolutely too large for any single entity to [track],” Yiannas said. “We’ve been working with IBM to digitize that, so the information is captured on the farm with a handheld system. It’s [also] captured at the packing house at the supplier,” he continued.

Suppliers can find instructions at http://ibm.com/food/getstarted and select the onboarding option and participation module that works best for them. In addition, Walmart and IBM will post a series of pre-recorded webinars to explain the new requirement.

“When it comes to safety, this is not a competitive issue,” Yiannas said. “We all win or lose together.”