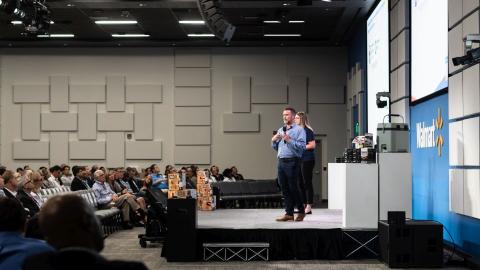 Entrepreneurs gathered across both days of the supplier expo. Credit: Walmart.

Walmart took another step toward adding U.S.-made products to its assortment — to the tune of 330 business deals.

Back in 2013, Walmart pledged to spend $250 billion over 10 years on products made, grown or assembled in the U.S., a milestone the company announced this week it has already reached. Last year, Walmart committed to invest an additional $350 billion on these American-made products by 2031.

This week more than 1,100 businesses from across the country pitched their U.S.-made products to Walmart and Sam’s Club merchants at Walmart’s ninth annual Open Call. Open Call is Walmart’s largest sourcing event and has been instrumental in helping the company achieve its initial $250 billion commitment.

Preliminary results from the sourcing event indicate that more than 330 of those pitches resulted in a deal for businesses to sell their items through placement on Walmart or Sam’s Club shelves, online at Walmart.com or on Walmart’s Marketplace.

Additionally, business owners of more than 280 products are continuing conversations with merchants for potential deals in the future.

“Investing in U.S. manufacturing is not only the right thing to do for the country’s long-term economic health, it's the right thing to do for customers today who are dealing with historic inflation,” said Doug McMillon, president and CEO of Walmart Inc. “We’re excited that more and more great products at strong price points are being produced in the U.S. Our $350 billion investment in items made, grown or assembled in the U.S. helps deliver our customers the goods they need, when they need them, at affordable prices, while supporting the creation of more than 750,000 jobs.”

In addition to one-on-one pitch meetings with Walmart and Sam’s Club merchants, participants in this year’s Open Call also heard directly from Walmart executives and merchants. Smaller breakout sessions were available for suppliers to learn more about valuable topics and resources available to them.

“We’ve met so many amazing small business owners through Open Call over the years, and this year is no exception,” said Scott Gutche, senior director, U.S. Manufacturing. “From Catrina’s Kitchen Southern Seasoned Flour to EZ-gro’s Spicy Salad Mix, Microgreen Growing Kit, we’re so excited about the new products and people that will be joining the Walmart supplier family.”

For the first time in Open Call history, Walmart offered an exclusive early-access period for existing Marketplace sellers to submit their applications. More than 4,500 entrepreneurs applied, and over 13,000 products were registered. This year, finalists representing all 50 states, including the District of Columbia, pitched their products for consideration through 30-minute one-on-one virtual and in-person meetings at Walmart’s headquarters in Bentonville. Nearly 60% of all business owners invited to Open Call self-identify as a diverse-owned business. All businesses that took part in Open Call are eligible to sell their shelf-stable products on Walmart’s various online platforms Walmart.com, Walmart Marketplace or Samsclub.com.