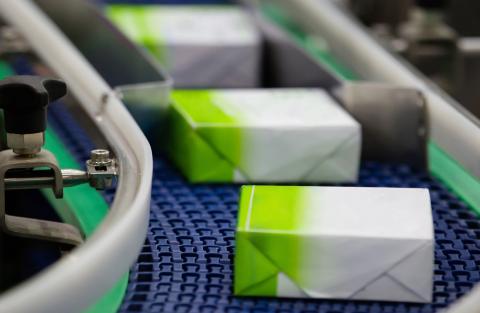 Walmart made two important announcements this week. The retailer is now more than halfway toward its goal to reduce or avoid 1 billion metric tons (a gigaton) of greenhouse gas (GHG) emissions from product supply chains by 2030 and it has raised the starting salaries for its truck drivers to up to $110,000 in their first year with the company.

Walmart’s goal to reduce GHG emissions from product supply chains by 2030 was set through its Project Gigaton initiative, which launched in 2017. With over 4,500 of Walmart’s suppliers engaged since the launch, and suppliers reporting a cumulative total of more than 574 million metric tons of emissions reduced or avoided, Project Gigatoncontinues to make progress as one of the largest private sector consortia of its kind, said Walmart.

Walmart designed Project Gigaton to catalyze and support supplier initiatives to decarbonize product supply chains. Most greenhouse gas emissions in the retail sector lie in product supply chains and are classified as Scope 3 emissions, as opposed to Scope 1 emissions, which are the direct result of a company’s operations — such as the emissions from refrigeration, onsite fuels, and transportation — or Scope 2 emissions, which are the indirect result of purchased energy, such as electricity.

“For each of these areas, we provide calculators that describe potential changes in business practices and translate them into emissions impact based on guidance from authoritative bodies such as CDP and leading NGOs like the World Wildlife Foundation (WWF) and the Environmental Defense Fund (EDF),” explainedKathleen McLaughlin, EVP and chief sustainability officer, Walmart Inc.; president, Walmart Foundation.

In 2021, more than 2,500 global suppliers — representing more than 70% of Walmart U.S. product net sales — reported their initiatives and resulting changes in emissions through Project Gigaton. Walmart also expanded a supplier financing program last year, that it developed in 2019 with HSBC, to offer enhanced financing and early invoice payments to Walmart private brand suppliers who set science-based emissions targets in line with the 1.5 Celsius degree pathway as reported to CDP.

In a business as complex as multicategory retail, Scope 3 emissions are difficult to measure, McLaughlin explains, since data does not exist to calculate a comprehensive and accurate Scope 3 emissions footprint (such a calculation would involve detailed information about multiple variables at every stage of the production, transportation and consumption of millions of items.)

“The emissions footprint of a single t-shirt, for example, depends on the agricultural practices in the cotton field that produced the yarn, the energy used in the mill that spun the fabric and the garment factory that sewed it, the fuel sources and efficiency of the trucks at each stage of transportation, and the choices a customer made regarding how to wash and dry the item,” said McLaughlin.

While it may be difficult, Walmart designed Project Gigaton to drive action to decarbonize supply chains, focusing on concrete changes to specific business practices and consumer behaviors suppliers can measure or at least estimate, using the best available science/guidance from NGO partners EDF, CDP and WWF.

In coming months, Walmart expects to revise its Scope 3 targets in collaboration with NGOs, suppliers and other stakeholders. In addition to pursuing its own mitigation initiatives, the retailer also continues to engage policymakers, NGOs, customers, associates and other retailers through direct advocacy, industry engagement campaigns such as the Retail Race to Zero and trade associations. 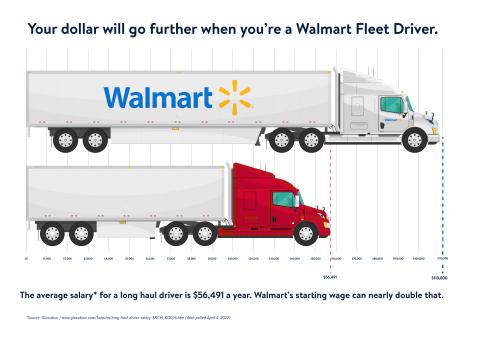 In other news, Walmart has launched its first-ever Walmart Private Fleet Development Program and said its truck drivers can now make up to $110,000 in their first year.

Through Walmart’s Live Better U (LBU) program, where Walmart covers the cost of tuition and books for a college degree for employees, and its nationwide network of Walmart Academies, the Walmart learning ecosystem was ready to help launch a driver pipeline program, it said. TO launch the program, established drivers of Walmart’s Private Fleet were given another title as certified driver trainers. After completing specialized training in the Walmart Academies, they began working with trainees – teaching written material and, overseeing the actual driving.

At the end of the classroom portion of the training, associates graduate with their CDL through LBU, months of real-world experience under trained instructors, and a dedicated mentor to help them smoothly transition into their new role. Over the course of a 12-week program, supply chain associates in the Dallas, TX, and Dover, DE, areas earned their commercial driver’s license (CDL) and became full-fledged Private Fleet Walmart drivers, Walmart said.