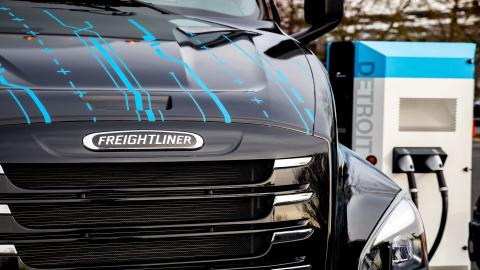 It’s clear that retailers are looking to shift and adapt in order to meet new sustainability goals and reduce their carbon footprint. Walmart has laid out its plan for transportation, a sizeable aspect of the company’s goal to achieve zero emissions across global operations by 2040.

The company has announced it will be focusing specifically on its last mile delivery fleet and Class 8 transportation — areas uniquely positioned for innovative solutions.

But it’s not as simple as flipping a switch, says the organization. Walmart’s approach is multi-pronged, as it needs to overhaul a transportation system that accounts for 12,000 drivers, 10,000 tractors, and 80,000 trailers driving 1.1 billion miles per year. In 2020, the fleet accounted for 24% of the company’s Scope 1 emissions.

“Today I’m excited to share more about our zero-emissions transportation strategy and announce a series of collaborations and pilots,” said Fernando Cortes, Walmart’s senior vice president of Transportation. “Many of these initiatives are first-of-their kind for Walmart and will be pivotal in moving us towards a zero emissions future, while being instructive to the entire transportation industry.”

Here’s a breakdown of how Walmart plans to reduce emission across the transportation segment.

Transitioning Away From Diesel

Walmart will be looking to deploy vehicles powered by compressed natural gas (CNG), moving away from Diesel. With a comparable range of around 700 miles, the switch should provide measurable emissions benefits.

Behind the science: Renewable natural gas is produced by capturing biomethane from decomposing matter and treating it to generate fuel. Uncaptured biomethane has up to 25 times the ability to trap heat in the atmosphere compared to CO2. By capturing it from sources like dairy manure or food waste, studies suggest that renewable natural gas can avoid more emissions than it generates.

Beginning next year, the company will also be introducing Cummins 15-liter natural gas engines, which provide the same power and torque as 15-liter diesel engines but produce lower emissions and require fewer costs per mile. Walmart will also be partnering with Chevron to supply trucks with CNG linked to renewable natural gas.

Walmart plans to be an early adopter of using liquid hydrogen to fuel its forklifts across its grocery distribution centers. Compared to battery-electric, hydrogen provides a greater range (around 400 miles), requires less time to refuel, and is much lighter than its counterpart, allowing the company to haul additional freight. The downside? Higher initial costs could trickle down to the end-consumers. 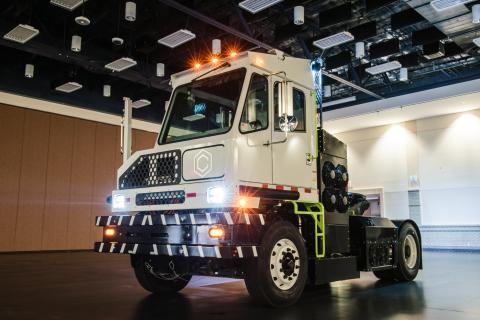 Coming Soon: In a few months, Walmart will be the first company in the U.S. to implement a second-generation hydrogen fuel cell yard truck.

Expected benefits include extended operating time on a single refuel (about 10 hours), faster refuel time, and less dependence on the electric charging grid.

“Plus, we can utilize the same infrastructure as our hydrogen forklifts while producing little to no emissions,” said Cortes.

We’ve seen that electric vehicles are becoming more mainstream, and so the company is exploring how it can leverage the technology in its own fleet.

While the company has already been running zero emissions electric yard trucks over the last year in its distribution centers, Walmart is looking to continue pairing the trucks with renewable energy like wind, solar, and hydro powers to achieve true 100% emissions reduction. So far, the switch has provided about a 50% reduction in emissions compared to diesel trucks.

Walmart has also engaged in a two-month pilot program to leverage refrigerated trailers with electric energy. Normally, the company relies on diesel fuel to keep its 10,000 trailers cold. Thus far, the company has run 18 routes between its distribution center in Shafter, California, and surrounding stores.

“We recently worked with Thermo King to haul Walmart’s first-ever refrigerated trailer operated on battery electricity in the U.S.,” said Cortes. “The trailer is designed to run on 100% electricity until the batteries are fully depleted. If the electricity is depleted mid-haul, the refrigeration unit cuts over to diesel. We’re pleased to share that throughout the entirety of the pilot, the trailer ran on electricity 83% of the time.”

The company is also looking to make changes over-the-road, particularly with day cabs. This summer, Walmart will be running a battery-electric day cab proof of concept, partnering with Freightliner’s eCascadia and Nikola’s Tre BEV out of its Fontana, California, distribution center. 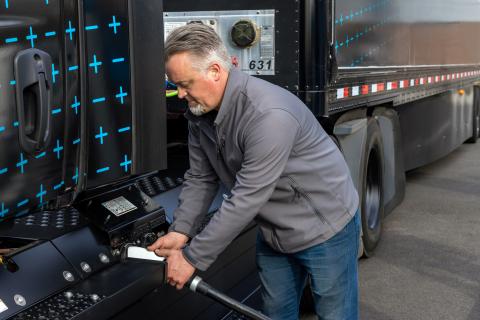 Cortes said these electric day cabs will be picking up loads from suppliers and delivering them to a consolidation center in the area. “Short-range deliveries such as these are a great use case for electric trucks, and we’re excited to be among the first to test them in our operations,” he added.

The company’s overall approach? Test and learn. Some vehicles will lean on hydrogen, others electric, and some require a hybrid of several approaches.

“As I look to the future, I’m confident that when you see a Walmart truck driving down the highway, you’ll be able to physically see us in action creating a better future for all of us — our children, our grandchildren and our planet,” said Cortes.