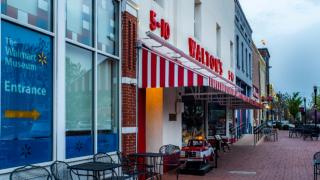 The Walmart Museum in Bentonville, AK will be closed through Spring 2024

Walmart has revealed plans to extensively renovate their company museum in Bentonville, Arkansas.

Starting November 1, 2022, The Walmart Museum on Bentonville Square will temporarily shutter as renovations take place. During this time, the museum and The Spark Cafe will temporarily move to The Ledger, a 230,000-sq.-ft. non-profit-run community space in downtown Bentonville. The goal is to make the museum more accessible, interactive, and inclusive, with the remodel expected to last through spring 2024.

The museum is housed in the original Walton's 5&10 building, and first opened in 1990 as a more traditional visitor center. In 2011, the museum underwent large-scale renovations, incorporating another building next door, and was renamed The Walmart Museum in 2012. For this latest round of renovations, plans on the blueprint include educational spaces, a larger exhibition space, and a rooftop patio.

“Throughout Walmart’s 60-year history, our associates have worked to continuously reinvent retail and how we deliver on our promise to save people money so they can live better. And reinvention has also been a big part of how we tell the story of Walmart,” said Cindi Marsiglio, senior vice president, corporate real estate, Walmart, adding that this new space would help “to evolve the way of telling the Walmart story.”

The museum is also located less than a mile from Walmart’s New Home Office, a multi-building, 350-acre mega-campus the retailer plans to open in phases through 2025.

A Time of Expansion and Reinvention

News of The Walmart Museum renovation comes at a time of rapid development for the retailer. Over the last year, Walmart has focused efforts on expanding their digital and physical footprints. In June, Walmart unveiled plans to build four next-generation fulfillment centers over the next three years. These four facilities alone could reportedly supply 75% of the U.S. population with next- or two-day shipping and, once built, they will collectively employ more than 4,000 people.

Also this year, the mega retailer invested in a new high-tech consolidation center in Lebanon, Pennsylvania. The 400,000 square-foot facility is designed to support all 42 of Walmart’s regional distribution centers, leveraging the latest in machine learning and robotics to streamline supply chain operations.

Over in the virtual world, Walmart recently leapt into the metaverse, developing two immersive experiences on the Roblox platform: Walmart Land and Walmart Universe of Play. Leveraging this new technology, users in The Universe can access virtual stores for avatars, play games to earn coins for virtual goods, and attend virtual events.

This year, the retailer also launched new iterations of virtual ‘Try It On’ technology, allowing potential buyers to select models and use their own image to better understand how clothing will look on them.