Walmart is partnering with autonomous vehicle company Gatik to pilot driverless delivery to transport customer orders between stores. Gatik, a startup deploying autonomous vehicles for B2B short-haul logistics, launched from stealth with Walmart as a partner back in June.

The test will take place in Bentonville, AR, on a two-mile route between two of Walmart’s stores, according to the company blog.

In March, Arkansas passed legislation allowing for autonomous vehicles to operate in the state. The vehicles will be staffed with drivers as part of the pilot program authorized under Act 468 of 2019, according to the Arkansas Democrat-Gazette. Ford Transit vans, which are gasoline-powered vehicles that have been retrofitted to operate autonomously, will be used in the pilot program. Act 458 limits the number of vehicles in a pilot project to three.

“With the help of Gatik, we’re making sure we stay on the cutting edge of grocery pickup by testing an autonomous vehicle to move customer orders on a two-mile route in Bentonville between two of our stores,” wrote Tom Ward, SVP, Digital Operations, Walmart U.S. “We aim to learn more about the logistics of adding autonomous vehicles into our online grocery ecosystem, operation process changes and more opportunities to incorporate this emerging technology.”

“There is a huge gap between autonomous Class 8 big rig trucks, which can only operate on highways, and smaller automated vehicles such as sidewalk robots and Nuro vehicles, which are restricted by operation speed, capacity, distance, and the curb,” Reilly Brennan, founding general partner at Trucks Venture Capital, said in June. “Gatik fills the critical 'middle mile' part of logistics, which is only becoming more valuable as a layer in the $800B logistics ecosystem.” 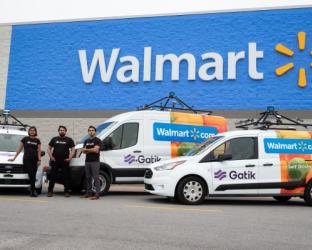 Gatik, a startup deploying autonomous vehicles for B2B short-haul logistics, has launched from stealth with Walmart as a partner.