Despite the fact that most of our apparel comes from offshore, there are still thriving apparel companies manufacturing here in the United States. As fashion grows faster and customers more demanding and personalization more popular (and trade more uncertain), you can expect to see an uptick in Madein-the-USA manufacturing. Below, learn about two U.S.-based companies, Wigwam and Bollman, which have been manufacturing socks and hats in the United States for 265 years, collectively.

Wigwam: Achieving a sock with the perfect circumference

Wigwam Mills, in business for 114 years, hopes to stay around a lot longer with innovative new socks. Innovation has become even more critical as performance sock competition has ramped up considerably in recent years.

Wigwam CEO Tom Wheeler considers business conditions heading into 2020 to be good, especially considering the unusual weather much of the United States saw during the early part of the year. A cold, wet winter coupled with a late spring didn’t drive sales of hiking socks. However, that picked up momentum during the summer.

Wigwam manufactures all of its socks in Sheboygan, Wisconsin, where it employs about 200. Wheeler says demanding consumers put pressure on the company to continue to balance both performance and fashion.

“Wigwam has always made socks from a technology standpoint, and from a quality standpoint, they are the best socks in the business,” Wheeler says. “The third leg has become fashion and lifestyle. We are emphasizing design and merchandising. Graphics, color and texture have become more important and the consumer demands all of them.”

Wheeler credits Wigwam’s “formidable” research and development staff as being the instigator of the company’s continuous innovation. They have been the architects of two patents and one patent pending, for the new SynchroKnit sock. The patents are for moisture control, which he says has been Wigwam’s mainstay.

“SynchroKnit is so exciting and unique for us,” Wheeler says. “For the first time in the history of knitting socks, a sock has the perfect circumference in terms of stitches.”

SynchroKnit socks are manufactured with fewer stitched in areas where less bulk is desired, such as the ankle and arches. Wigwam touts the tighter fit around the arch as being more supportive.

Competition is keen and getting more so. Wheeler says the barriers of entry to sock production are a lot lower now. Wigwam’s advantage is brand recognition, according to Wheeler. After 114 years in business, consumers know the company, which stands behind its products and its strategy is to stay the course. 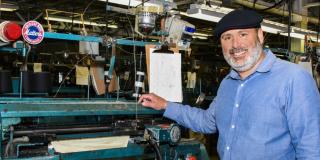 Bollman: Bringing hats back into fashion

Bollman Hat Company, which touts itself as America’s oldest hat maker, is thriving in Adamstown, Pa., some 151 years after its founding. The company has had its ups and downs through the years as hat-wearing trends evolved, but seems to be on an upswing recently with sales rising 13 percent in 2018.

Bollman produces several of the world’s top headwear brands, including KANGOL, Helen Kaminski, Bailey, Eddy Bros. and Country Gentleman. In addition to making hats at its Pennsylvania factory, it sources hat components and finished products from more than a dozen companies.

Bollman Hat Company acquired the rights to KANGOL hats in 2002. The name is a combination of K for knitting, ANG for Angora and OL for wool. Bollman president and CEO Don Rongione joined the company in 1982 as controller and worked his way up the ranks.

Rongione says Bollman has been making wool hats continuously since it was founded in 1868. Along the way, Bollman acquired another hat company that allowed it to expand production in Pennsyvlania. In addition to its 10 brands, the company produces hats for private-label customers such as Rag and Bone and Ralph Lauren. Bollman also sells products direct to consumers from its website and its brands’ websites.

“We saw a nice increase in sales last year and we are projecting an increase of 7 percent this year,” Rongione says. “We are off to a good start in 2019. Our sales growth has largely been driven by our two top brands, KANGOL and Helen Kaminski.”

Bollman manufactures about a third of its hats at its Pennsylvania factory. The remainder is produced around the world. Rongione says the overseas production is a result of acquiring brands that have never produced anything in the United States.

A big proponent of manufacturing in America, Rongione founded American Made Matters in 2009, an organization devoted to educating Americans about the importance of buying U.S.-made products. Members include a variety of U.S. manufacturers.

Rongione notes the changing use of hats throughout Bollman’s history. The company’s first 90 years coincided with a period when hats were essentially part of the daily uniform for many Americans. That trend began subsiding in the late 1950s and hats gradually became a fashion statement for wearers. He says the recent increased popularity of brimmed hats such as fedoras is a testimony to Bollman’s innovation.

KANGOL is one of Bollman’s best-known brands and it is one of the products it knits at its Pennsylvania facility. Bollman acquired the rights to KANGOL hats in 2002. Rongione says the previous owners had shut down manufacturing operations in England and moved the company’s equipment to China to drive down production costs.

As a result of the acquisition, Bollman acquired a factory in China using knitting equipment that was custom-built for KANGOL in the 1930s. Bollman sold the factory to a company that wound up exiting the business in 2013. Bollman then purchased the unique knitting machines.

John McCurry is an Apparel contributing writer based in Georgia.