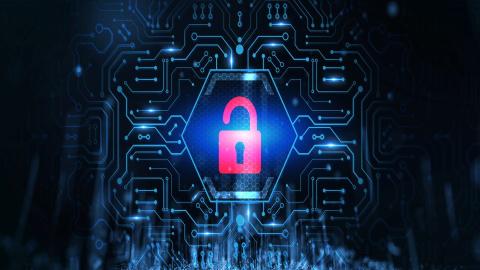 I log hours — daily — speaking with customers about their e-commerce businesses and their dizzying array of challenges. These range from product design to logistics — among their largest costs —  to digital marketing.

As a vendor with a rare view into the minutia of online-retailer consumer traffic, I routinely help customers identify and fight a hidden drag on their growth: ad fraud.

What Is Ad Fraud?

It’s the overarching term for a collection of tactics that fraudulently represent online advertising impressions, clicks, conversion or data events to generate revenues for publishers or exhaust advertising budgets for competitors.

For retailers, ad fraud is any online advertisement cost you pay for a non-targeted buyer. The problem is bigger than most retailers know. For every $5 spent on digital advertising, $1 is lost to advertising fraud (some estimates are even higher at $1 in $3 ad dollars lost).

For retailers looking to keep their businesses in the black, identifying ad fraud and combating it is critical. Here are the three steps retailers can take today.

Like the murky world of computer security, the ad-fraud world is a web of players and ever-changing tactics. The first step, the consistent identification of ad fraud, is complicated for retailers. A good place to start: Understand how customers arrive and determine their level of engagement.

What Percentage of Visitors are Actually Engaged?

A common e-commerce saying is “nobody arrives at the website for free.” You’ve either paid with hard dollars (advertising and affiliate marketing) or soft dollars (content creation and public relations).

Yet brands are surprised when we see the percentage of users who are actually engaged with the site. An engaged user meets any of the following criteria:

This Google Analytics segment uses this criteria to differentiate “all users” from “engaged users.” If the difference is significant (20%+), many visitors arrive at the site and leave.

This isn’t always ad fraud (it can also be the content itself or a slow page load), but it’s a proxy to identify how much of a “click-and-bail” problem exists. The example below shows six out of 10 visitors had no engagement — a sign of a costly mis-targeting.

What are the conversion and engagement rates across channels?

The Google Analytics custom reports section is a powerful tool in a retailer's arsenal. Look at the difference in engagement rate and the conversion rate across channels. Although marketing differs across digital platforms, we shouldn’t expect a wide disparity in engagement rates.

Some common-sense rules also help dig into the data. This custom report, when combined with the engagement segment above, helps demonstrate our “paid search” is underperforming our free organic search. This customer discovered that 14% of paid search clicks were generated from bots and regions where the product isn’t sold. 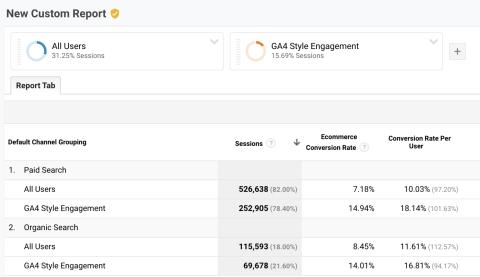 What Percentage of Users Are ‘Automated’ or ‘Bots?’

With an understanding of how many users are not engaged and a breakdown by channel, it’s time to use additional data. “Bot protection” services are often sold by security companies to defend against nefarious players.

But, in advertising, blocking the page view doesn’t actually save us money. Paid advertising channels are “pay per click,” so a bot clicking on advertising links has already done damage.

Instead, investing in an enterprise-grade bot-protection system helps identify automated traffic that drains ad budgets or inflates advertiser revenues. In our recent study, we found that more than 5% of all paid clicks from the three major advertising platforms (Google, Facebook, and Microsoft) were fraudulent ones easily identified as bot traffic.

The key to combating wasted ad spend is a continuous process of identifying, reporting, and restricting advertising activity to engaged users. Reviewing results on a bi-weekly basis is a good cadence. This also allows retailers to identify material changes in conversion and engagement rates while not subjecting the team to the natural fluctuations that come with online retail.

When adding new advertising campaigns and/or channels, look at the engagement rates on a more frequent basis (weekly). It’s vital to look at more granular levels (hourly data) during these new changes and watch for material changes in click rates that have low conversion. Automated activity will often come in bursts — letting you quickly identify when nefarious players are active.

Most major advertising platforms provide a system to report fraudulent clicks — although retailers rarely use it. The platforms have internal systems to weed out ad fraud, but adding your data helps finetune advertising campaigns’ efficacy. For example, Google Ads provides a simple online form where customers can submit fraudulent click data (also called invalid traffic or IVT). This form requires logging information and is most effective when you include the Google Click ID, date, time, and the source IP address of the invalid click. You can request a review and credit every 60 days using this system.

Be Proactive and Add IP Restrictions

An effective way to combat ad fraud: Stop showing advertisements to locations that generate fraud activity. Geographic restrictions are good, but criminals easily evade them. A better method: Exclude IP addresses that have generated fraudulent activity in the past and update them in your campaigns at regular intervals. For example, adding a restriction to not show advertisements to known data center and cloud computing networks can dramatically impact bot activity — with minimal potential impact on enterprise clients who use “on cloud” VPNs.

With this three-step plan of attack at the ready, your online store will be better equipped to take on ad fraud of all sorts.

—Jake Loveless, CEO of Edgemesh, has had a 20-year career in making things go faster, from low latency trading for Wall Street to large-scale web platforms for the Department of Defense. He is a two-time winner of high-performance computing awards and a frequent contributor to the Association of Computing Machinery. Today, Loveless runs Edgemesh, the global web acceleration company he co-founded with two partners in 2016. Edgemesh helps ecommerce companies across multiple industries and platforms (including headless) deliver 20%-50% faster page loads to billions of users around the globe.