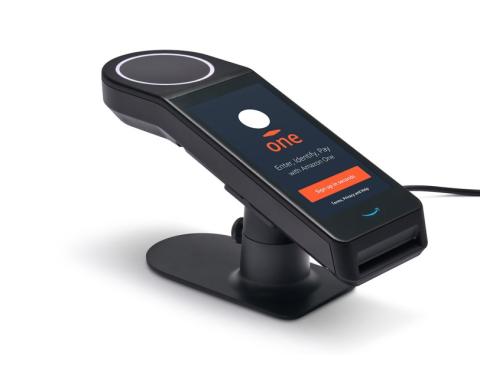 Paying with the wave of a hand isn’t just for Sci-Fi movies anymore. Amazon is introducing its Amazon One biometric technology to select Amazon Go stores, allowing shoppers to pay via their palms.

It was reported in January this year that Amazon was working on the contactless tech that would work in retail stores. Now the retailer has announced customers can use Amazon One as an entry option at two Amazon Go stores in Seattle (the 7th & Blanchard and South Lake Union at 300 Boren Ave. North. locations).

To sign up at these stores using an Amazon One device, shoppers will insert a credit card, then hover their palm over the device and follow the prompts to associate that card with the unique palm signature. The tech builds the signature via computer vision technology in real time. Customers can enroll one palm or both. Once enrolled a shopper can just hold their palm above the Amazon One device at entry for about a second or so, and enter the store.

According to Amazon, the service is designed to be highly secure and uses custom-built algorithms and hardware to create a person’s unique palm signature. Amazon explains that palm recognition is considered more private than some biometric alternatives because you can’t determine a person’s identity by looking at an image of their palm. It also requires someone to make an intentional gesture by holding their palm over the device to use.

The Amazon One device is protected by multiple security controls and palm images are never stored on the device; the images are encrypted and sent to a “highly secure area” Amazon custom-built in the cloud where it creates the palm signatures.

“Beyond Amazon Go, we expect to add Amazon One as an option in additional Amazon stores in the coming months,” the company said. “And, we believe Amazon One has broad applicability beyond our retail stores, so we also plan to offer the service to third parties like retailers, stadiums, and office buildings so that more people can benefit from this ease and convenience in more places.”

Retailers interested in adding Amazon One tech to their own stores can reach out through the email address: [email protected] and learn more on the Amazon One website.