Instacart Alcohol Delivery Is Available In:

Instacart is expanding its alcohol delivery experience for customers across the U.S., making Instacart one of the largest online delivery and pickup marketplaces for alcohol in the U.S.

As part of the expansion, Instacart customers in 14 states, as well as Washington, D.C., can now have alcohol delivered in as fast as an hour from national, regional and local grocers such as Albertsons, Kroger, and Publix, as well as wine and liquor specialty stores like BevMo!, Binny's Beverage Depot, and Total Wine & More. Instacart customers in participating states will now also see a new in-app banner that makes it easier to shop directly from beer, wine and spirit "aisles" of select retailers on the Instacart marketplace.

"Part of grocery shopping for many people goes beyond getting fresh produce, meats and pantry staples, and includes picking up the perfect bottle of wine for a dinner party or their favorite beer to sip while watching the big game," said Nilam Ganenthiran, chief business officer, Instacart. "By working alongside our retail partners to add alcohol to the marketplace, we're offering customers more choice and making it easier for Instacart to be their 'one-stop-shop' to get the groceries they need ― including beer, wine and spirits ― from the retailers they love."

Instacart has gradually rolled out its alcohol shopping experience, which initially began with a small number of retail partners and has grown substantially over the course of the last year. With this expansion, alcohol delivery via Instacart now reaches more than 40 million households across the U.S. and is available from nearly one-third of Instacart's more than 300 retail partners. 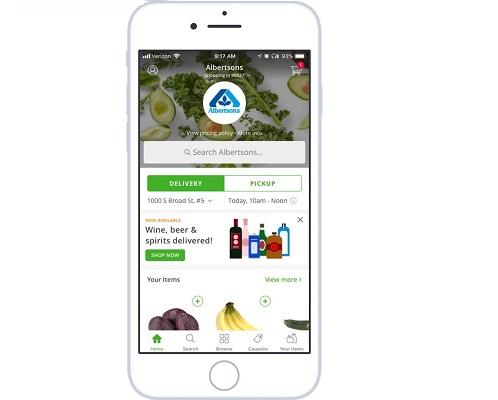 "We couldn't be more excited to work with Instacart's extensive delivery network to create a fantastic customer experience," said Jewel Hunt, GVP eCommerce, Albertsons Companies. "Now customers have the convenient option of rush delivery straight to their doorsteps for all of their grocery needs, from everyday essentials to fresh produce to that favorite bottle of wine for a special dinner."

"By partnering with Instacart, BevMo! is able to bring our customers a flexible and convenient way to have the drinks they love delivered directly to their door," said Tamara Pattinson, chief marketing and information officer, BevMo!. "Instacart's broad reach has enabled BevMo! to offer one-hour, same-day and next-day delivery to more customers than ever before.