Demand for next-day delivery is surging, and mega retailers like Amazon and Walmart are fighting to deliver. Then there’s Target. The retailer is seeing digital sales surge and said its ability to offer same-day services is the result of its strategy to place stores at the center of fulfillment, a tactic which has led to its success today.

After years of working on its next-day plan, CEO Brian Cornell noted Target is now seeing “a really positive guest response to our same-day digital fulfillment services, which drove well over half of our digital sales growth in the quarter.”

“I think our decision years ago to put our stores at the center of our fulfillment strategy is paying off with accelerated growth,” said Cornell.

Specifically, in Target’s Q1 2019, well over half of its digital growth was driven by same-day fulfillment options: in-store pickup, Drive-Up and Shipt.Put another way, these three services drove more than a quarter of total company comp growth of 4.8%. Store comparable sales growth of 2.7% drove just over half of the total company comp, while comparable digital growth of 42% contributed another 2.1 percentage points.

To meet this surging digital growth, Target has developed its stores into digital hubs that enhance the retailer’s speed and reduce costs.

“Clearly as we talk to the consumer, we talk to the guest, we know how important convenience and speed is and that's why several years ago, we made the decision to put our stores at the center of our fulfillment strategy, and you're seeing that pay off right now,” said Cornell.

Target stores handled more than 80% of Target’s first quarter digital volume, including all of its same-day options combined with digital orders shipped directly from stores to shoppers’ homes, Cornell noted. Digital accounted for more than $5 billion of Target sales last year and its stores fulfilled about two thirds of that volume.

“This year, given our digital growth trajectory and the rapid adoption of our same-day services, we are on track to grow Target’s digital sales by more than $1 billion in 2019 and fulfilling even higher percentages of this volume from our stores,” said Cornell. “So I want to emphasize that we’re not talking about a theory. This is reality today and it’s a meaningful and growing part of our retail business.”

However, Cornell noted, Target still has a continued opportunity to realize cost savings by reducing the frequency of split shipments even more. To this end the retailer is developing an enhanced inventory planning and control system, which is expected to deliver increased precision in Target’s inventory allocation, reducing the number of occasions when a split shipment is needed. 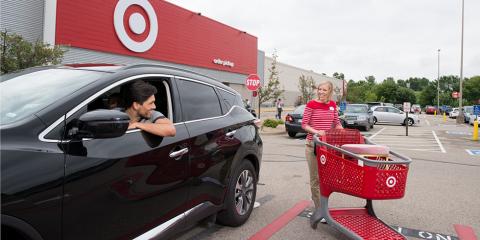 Target aims to offer Drive Up at most stores by the end of 2019.

The fastest growing services Target provides and its most profitable services through the digital channel are order-online-pickup-in-store, Drive-Up and Shipt, according to EVP and COO John Mulligan.

Target offers in-store pickup in every one of its 1,851 locations and will walk the order out to the parking lot in more than 1,250 of them--it recently expanded the Drive-Up service and is shooting to offer the convenience at most Target stores by the end of the year.

Shoppers in 1,500 stores can order from Target through Shipt, which offers unlimited free same-day delivery from Target and more than 50 other retailers across the country for $99 annual fee. Target bought the personal shopping service at the end of 2017 and there are now nearly 100,000 Shipt shoppers delivering orders across the country today. The service is still growing rapidly as Target brings on new marketplace partners, including CVS and Petco, which launched nationwide on the Shipt marketplace in Target’s Q1.

The retailer’s Q1 digital sales from pickup in-store increased more than 80% from a year ago, even as Drive-Up and Shipt grew even faster. Additionally, Target’s analysis indicates that the new services like Drive-Up and Shipt are driving incremental trips for Target rather than simply replacing other forms of shopping, Cornell noted.

“As [these three services] continue to grow meaningfully faster than the rest of digital, we expect our digital profitability to improve,” Mulligan noted. “So we’re really excited because the guest preference is meeting up with exactly the capabilities we have and they happen to be the most economically feasible for us going forward.”

Looking ahead, Target is working on store replenishment to deliver additional cost savings as it moves store backroom activities upstream into its distribution facilities. Over time the retailer hopes it will enhance its inventory allocation, delivering higher in-stocks, while reducing safety stock across the chain. The expected result of this work is that it will free up additional space in stores to accommodate further growth in digital fulfillment. But these changes won’t come fast. These replenishment efforts are still in the early stages and it will take years to roll out this new model across the chain, noted Mulligan.