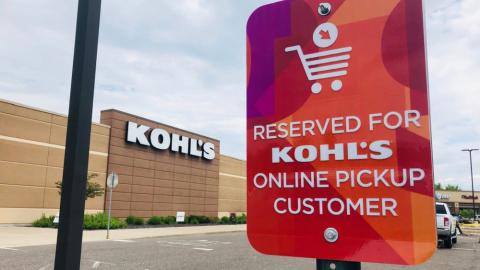 Franchise Group Inc, owner and operator of The Vitamin Shoppe has put in a bid for Kohl's Corp with a $9 billion indicative offer, according to people familiar with the matter, Reuters reports. Franchise Group has informed Kohl's it would be willing to pay $69 per share to acquire the department store retail chain, subject to due diligence, the sources said, but Hudson's Bay Company has indicated it is willing to pay at least $70 per share for Kohl's.

Franchise Group is the owner and operator of Pet Supplies Plus, American Freight, The Vitamin Shoppe, Badcock Home Furniture & more, Buddy’s Home Furnishings and Sylvan Learning. On a combined basis, Franchise Group currently operates over 3,000 locations predominantly located in the U.S. that are either company-run or operated pursuant to franchising and dealer agreements.

Kohl’s Pushes Back Against Pressure

Kohl’s Corp continues to push back against pressure, calling on shareholders to reject activist group Macellum’s proposal to add 10 new board directors. The department store retailer came under fire from Macellum, which holds nearly 5% of the outstanding common shares of Kohl’s, when it issued an open letter to its fellow shareholders and later nominated 10 directors, which would give it control of Kohl’s board if elected.

Kohl’s Corp mailed a letter to shareholders on April 11, detailing why their board of directors has the necessary skills to oversee Kohl’s evolving strategy.Kohl’s urged shareholders in an earlier letter to vote for its board nominees at its annual meeting in May.

After detailing the experience of the board, the letter noted that Jonathan Duskin’s promotion of “baseless speculation and repeated falsehoods regarding the board’s process” is concerning.

“Similarly problematic are his criticisms of the board’s reject ion of an opportunistic bid to acquire the company at $64 per share, a price well below the value that Macellum itself publicly declared. Mr. Duskin appears to be advocating for a quick sale at any price.”

In January, Kohl’s board and its finance committee, comprised solely of independent directors including a designee from Macellum, directed Goldman Sachs to engage with bidders who submitted indications of interest in Kohl's that were non-binding and without committed financing. The retailer has said the process continues and involves “further engagement with select bidders who submitted indications of interest in Kohl’s, including assisting with further due diligence that may create opportunities to refine and improve proposals.”