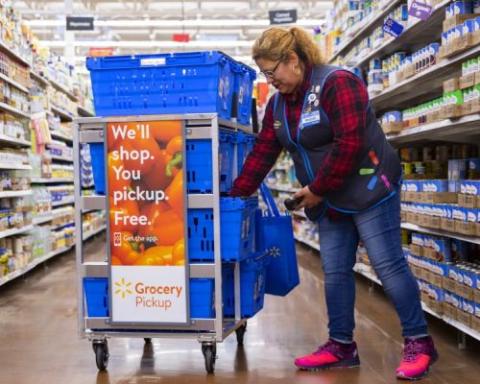 Walmart reported holiday results that fell short of expectations for its 2020 fourth quarter, but U.S. grocery and e-commerce sales were strong throughout.

“In the few weeks before Christmas, we experienced some softness in a few general merchandise categories in our U.S. stores,” Brett Biggs, CFO of Walmart Inc. said. “However, Walmart U.S. grocery sales and e-commerce sales were strong throughout the quarter.”

Walmart said grocery sales on a “two-year stacked basis were among the best in the past 10 years.” The retailer noted its expanded omnichannel offering contributed to strength, along with increased value, including higher penetration of private brands.

Walmart now has around 3,200 grocery pickup locations, more than 1,600 stores with same-day grocery delivery and about 1,500 pickup towers. It also began Delivery Unlimited at more than 1,400 locations last November. The program gives customers the option to pay a yearly $98 fee or a monthly $12.95 fee to receive unlimited Walmart Grocery Delivery orders to their homes.

“Walmart has taken steps to build a more formal membership program through its unlimited grocery delivery offering,” notes Nicole Amsler, VP of Marketing at Formation.“Much like Amazon’s Prime membership, unlimited grocery delivery aims to increase convenience for customers and keep shoppers coming back through a paid program. Grocery has played a major role in Walmart’s past e-commerce sales growth so it will be interesting to see if the company looks to apply this membership model to more aspects of its business."

Walmart also just announced last month that its Alphabot system is fully functional and operating inside a 20,000-square-foot warehouse behind the Walmart’s Salem, NH, supercenter. The tech uses autonomous carts to retrieve ambient, refrigerated and frozen items ordered for online grocery. After it retrieves them, Alphabot delivers the products to a workstation, where a Walmart associate checks, bags and delivers the final order.

“Walmart has an opportunity to distinguish itself as a customer experience leader with its innovation of the grocery pickup and delivery process,” said Bobby Greenberg, SVP of Consulting at Kobie. “The retail giant's rollout of Alphabot, its automated warehouse technology, could give competitors like Amazon and Target a run for their money. By marrying the data, analytics, people and processes with its Alphabot capability, Walmart can fuel the growth of its significant grocery business with enhanced customer experiences that can bridge the online, in-store gap and have a real impact on its bottom line.”

While Walmart’s grocery and e-commerce saw strength throughout the quarter, it noted a weak demand for toys, media and gaming, and apparel, as well as a shorter shopping season cut into its results.