The White House announced the news ahead of President Joe Biden hosting a meeting on Wednesday to discuss the challenges at ports across the country and actions to address the delays and congestion across the transportation supply chain.

“Just UPS and FedEx alone, combined, shipped 40% of American packages by volume in 2020,” the official noted. “By taking these steps, they’re saying to the rest of the supply chain, ‘You need to move, too.  Let’s step it up.’ Their efforts and the efforts of others — Target, Samsung, and Home Depot, among others — will help us to start address the — start addressing the backlog. And they pave the way for smaller retailers to also get their goods from a 24/7 model.”

The commitments being announced, according to The White House, include:

More than 3,500 additional containers per week will move at night through the end of the year because of the commitments across these six companies, according to The White House.

“Those boxes contain toys, appliances, bicycles, and furniture that Americans purchased online or at their local small business, and pieces and parts that are sent to U.S. factories for our workers to assemble into products,” the fact sheet states. “And this is just a start — these commitments provide a clear market signal to the other businesses along the transportation supply chain — rails, trucks, and warehouses — that there is demand to move additional cargo at off-peak hours.” 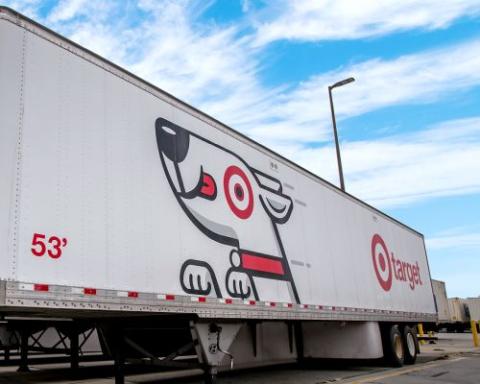 On Tuesday, Target said in a statement that it’s imports comprise less than 3% of container volume in the U.S., but it’s operating in ways that help reduce overall supply chain congestion. Credit: Target

Target, Walmart, The Home Depot have already moved to charter their own container ships to address supply chain issues ahead of the holiday season.

Target revealed in September it had chartered its own container ship to regularly bring Target merchandise from overseas ports to the U.S., and noted “as co-managers of the ship, we can avoid delays from additional stops and steer clear of particularly backed-up ports.”

On Tuesday, Target said in a statement that it’s imports comprise less than 3% of container volume in the U.S., but it’s operating in ways that help reduce overall supply chain congestion.

“We’ve been running 24/7 supply chain operations for years, including at the ports, which allows us to pick up our containers in less than 24 hours, helping clear the way for other freight. And at our nation’s largest ports in Los Angeles and Long Beach, we’re currently moving about 50% of our containers at night, and we’re committed to increasing that amount by 10% over the next 90 days to help clear up the ports while making sure that our total supply chain continues running effectively.”

The Home Depot has also arranged for several container vessels for exclusive use, a move president & COO Ted Decker called “a creative solution to better serve our customers in this dynamic environment,” during a call with analysts.