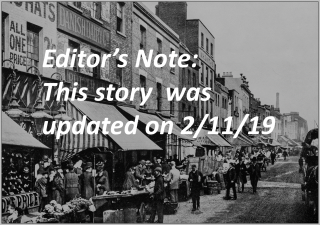 In one of the toughest economic climates in recent memory, it is important to note that many well run companies have survived far worse. These survivors deserve special recognition for their ability to run smart businesses and satisfy customers in all economic conditions for more than 100 years..

Retail's oldest survivors have succeeded by developing an enduring brand, giving customers what they want, and adapting to changing conditions. They have also avoided piling up excessive debt, over expanding their store base, and dodged the recent wave of consolidations and retail store closings.

Here is our list of the top-10 oldest retail chains that have been through it all - and have managed to find the winning recipe for longevity and retail success.

On April 7, 1818, Henry Sands Brooks opened H. & D.H. Brooks & Co. The company is now the oldest men's clothier in the U.S. and one of the nation’s oldest continuously operating businesses. In 1870, Brooks' four sons inherited the family business and renamed it Brooks Brothers. The merchant is famous for introducing ready-to-wear men’s suits to American customers. It is now owned by the privately held Retail Brand Alliance (renamed The Brooks Brothers Group), and currently operates 210 stores in the U.S. and 70 in other countries

Samuel Lord and George Washington Taylor founded the store in 1826 to sell specialty women’s apparel. It is now the oldest mid- to high-range department store chain in the United States. Noted as an innovator over many decades, Lord & Taylor was the first store to present dramatic Christmas windows filled with holiday displays rather than merchandise. Today, it is owned by Hudson Bay Company (HBC) and operates 45 stores in nine states.

The precursor to the original Kiehl Pharmacy, the Brunswick Apotheke, opened in the East Village of New York in 1851 at the corner of Third Avenue and 13th Street. In 1894 apprentice John Kiel purchased the drug store and renamed it Kiehl’s Pharmacy. In 1921 Irving Morse bought the pharmacy from retiring John Kiehl and a family member blends “Love Oil,” which was the original formula for Kiehl’s famous musk oil. Today Kiehl’s is owned by L’Orleal Group and has more than 250 stores worldwide plus more than 1,000 other stores selling its luxury skin care products.

Macy's was founded by Rowland Hussey Macy, who moved to New York City in 1858 and established R.H Macy Dry Goods. From the very beginning, Macy's logo has included a star, which comes from a tattoo Macy got as a teenager working on a Nantucket whaling ship. Today, Macy’s is the nation’s largest department store chain with more than 700 stores and one of the largest retailers in the country. It has also become an icon in popular culture and media, largely due to its famous Macy’s Day Parade, which combines both a Thanksgiving and Christmas theme into a nationally televised extravaganza.

George C. Shaw opened his first store in Portland, Maine, in 1861. The store was a tea shop that gradually expanded locations and sell food items in New England. Some years later, another New Englander, Maynard A. Davis established several Brockton Public Markets (BPM) in the Brockton and New Bedford areas of Massachusetts. In 1919 the companies merged but operated independently. It wasn't until 1979 that the company formally settled on the Shaw's Supermarkets name. Today, there are 133 Shaw's Supermarkets in New England and the parent company is Albertson's.

6. Bloomingdales – 1861
Bloomingdale's, now owned by Macy's, was founded in 1861 by brothers Joseph and Lyman G. Bloomingdale. It started selling hoop skirts and when their popularity declined the brothers shifted to women’s apparel and specialty items. The store became noted for serving upscale customers with concierge-like attention, something known today as clienteling when combined with database technology. Today it has 20 stores mostly located in coastal states.

Saks Fifth Avenue is the successor business founded by Andrew Saks called Saks & Company. In 1923, it merged with Gimbel Brothers and operated as an autonomous unit. In 1924, Horace Saks and Bernard Gimbel opened the upscale Saks Fifth Avenue in New York City.In 2013 the Hudson’s Bay Company (HBC) acquired Saks Fifth Avenue and opened its first store in Canada in 2016.

J. H. C. Petersen and his three sons opened a store in a 20-foot-by-50-foot storefront in downtown Davenport, Iowa, in 1872. In 1916, the J. H. C. Petersen Company sold a much larger department store to a partnership of R.H. Harned, C.J. von Maur, and Cable von Maur. Today, Von Maur has grown to be a 31-store chain with department stores in 14 states including Illinois, Indiana, Iowa, Kansas, Kentucky, Michigan, Minnesota, Missouri, Nebraska and Ohio. A signature element of Von Maur stores is a live pianist who performs for customers during business hours.

Barnes & Noble is the largest book retailer in the United States. The company started out in Wheaton, Illinois, as a book printer in 1873 under Charles M. Barnes. It opened its first bookstore in 1917 in partnership with G. Clifford Noble in New York City, where the company is now based. Today, it operates 638 stores in all 50 states and dominates the bookstore business in the U.S.

Sears, Roebuck and Company, commonly known as Sears, was founded by Richard Warren Sears in Chicago as a catalog retailer selling watches. The catalog business quickly grew to selling everything from sewing machines to automobiles. By 1895 the company was producing a 532-page catalog that became known as The Consumer’s Bible. The first Sears store opened in Chicago in 1925. Today, Sears operates more than 1,500 stores under multiple brands and formats.

In order to qualify for this list, retailers must have 10 or more store locations in the U.S. or have surpassed sales of $100 million. The brand name must also be in continuous operation. The list was compiled from Web research, industry sources, and reaching out to retail experts. We look forward to hearing from anyone that has additional candidates that make the list.